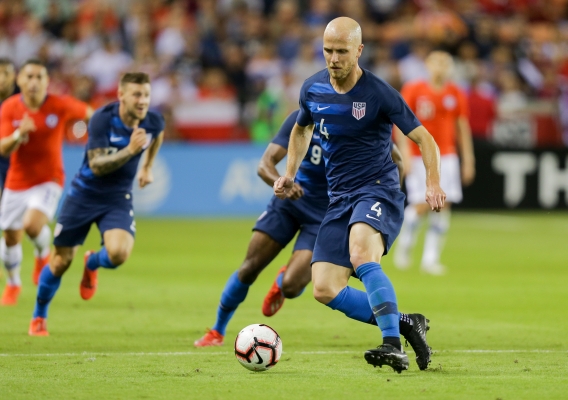 The United States national team drew with Chile in Houston on Tuesday night. ASN's Brian Sciaretta watched the game for a second time and is here with five thoughts.
BY Brian Sciaretta Posted
March 27, 2019
10:00 AM
THE UNITED STATES national team finished its March window with a 1-1 draw against Chile and it left new manager Gregg Berhalter with plenty to think about over the next two months before the Gold Cup. This was by far his toughest test and there were plenty of positives and negatives.

Prior to this camp, Berhalter said he wanted to use these two games to evaluate more players in his effort to put together his Gold Cup roster. Some players certainly helped their case this window, others did not. Over the next two months the player pool will continue to shift as players club form changes, but Berhalter should have a pretty good idea of his team moving forward.

Against Chile, Berhalter was not playing with his optimal lineup. Jozy Altidore, Zack Steffen, and Weston McKennie were injured, Tyler Adams returned to Leipzig, and Christian Pulisic only played the first 36 minutes. In addition, Berhalter also opted to look at a different pair of central defenders with Omar Gonzalez and Matt Miazga. At this point, it is unclear what is his first-choice central defense pairing but it likely will be two out of the three from John Brooks, Miazga, and Aaron Long.

Against Chile, the U.S. team got off to a strong start but Chile dominated the middle portion of the game. After some tactical adjustments, the U.S. team took Chile out of the game and improved towards the end.

It’s easy to see situations where Chile would not be able to do what they did with a better defensive presence in the midfield. Adams and McKennie are very good in this area whereas Roldan and Lletget struggle. Despite playing lineups that won’t resemble it’s best 11, the U.S. team still earned a draw against the two-time defending Copa America Champions with several players showing that they can help the team – even if not in the starting XI.


Michael Bradley had his best game for the U.S team in years. He connected with a few outstanding long balls that resulted in dangerous chances. He completed 91% of his passes with his misses coming on only ambitious attempts to play forward.

Defensively, he won four tackles to force turnovers and was the best American player on the field over the 90 minutes. But without a defensive presence in the midfield like Adams or McKennie, Bradley was probably asked to do too much defensive work against an opponent like Chile. But he was still a major net positive for the U.S. team in the game.

Under Berhalter, Bradley is not the captain of the team and he is not a regular starter. He might get phased out moving forward in the cycle because a sole No. 6 midfielder in a 4-1-4-1 formation is extremely demanding and Bradley might eventually not have the stamina to play a full 90 in this role. But for now, he still has role and he will likely at least be in the 23-player roster for the foreseeable future.


For the first time in his still young tenure as the U.S. national team coach, Berhalter showed different tactical approaches and that he was willing to move beyond the “system” that he used in the first three games.

DeAndre Yedlin earned the start at right back and Berhalter did not ask him to cut into the middle of the field and play as a No. 6 with the ball.

When Chile was controlling the middle portion of the game, Berhalter Lovitz into the game to move to a 5-4-1 formation and it completely neutralized Chile’s attack – but still gave the U.S. team some decent attacking moments where they could have found the winner.


#Chile only attempted 1 shot and had fewer passes in final third after 56th minute, when #USMNT changed to 3 centerbacks. The defense looked much more solid and comfortable in 5-4-1, closing down the gaping holes between the lines that La Roja had been playing through.#USAvCHI pic.twitter.com/KRvlHVuGSU

It was a positive development for the U.S. team to show that the manager has different approaches and can adjust midgame if needed to fix problems. It hasn’t been since the Bob Bradley-era when the team was able to change its approach to fit what was needed in the game.


Overall, Gyasi Zardes had a good couple of games. He scored a fluky goal against Ecuador but still was able to help with possession in dangerous areas to create chances. Against Chile, Zardes made a very good play to assist on Pulisic’s goal and had another good game with his hold-up play in the box.

Zardes probably won’t start when Jozy Altidore returns to health (and Altidore’s track record of being healthy for summer tournaments isn’t great) and he might not start if/when Josh Sargent becomes a regular starter at the club level. It also remains to be seen if Bobby Wood can return to form or if Berhalter sees a need for Andrija Novakovich.

But Zardes cemented his worth inside the full 23 player roster and as a player who can help the team in certain areas.


On both sides of the ball, the midfield wasn’t great last night from the 10th through the 56th minute (when Berhalter switched formations). Chile is a very good opponent and centrally the combination of Roldan, Pulsic, and Lletget did not add enough defensive presence to help Michael Bradley in the middle of the field. It conceded way too much time and space for Chile.

While Ecuador wasn’t as difficult of an opponent as Chile, the U.S. team had McKennie further back in the midfield on defense to help with Trapp (in Bradley’s position). In addition Tyler Adams often pinched in from right back to play defense as well.

Against a better opponent, the absence of McKennie and Adams was sorely missed. It probably makes it impractical to play difficult opponents in a 4-1-4-1 formation without the two Bundesliga youngsters.

Offensively, Lletget and Roldan did not create nearly enough chances when the U.S. team had the ball. Corey Baird’s final ball let him down when he was able to get into dangerous spots. As a sub, Jordan Morris struggled like he did Thursday although that might be due to the rust of limited game time the past 18 months. Paul Arriola continued to be a bright spot.

One of the more promising developments in the midfield was how Bradley and Trapp were effective while playing with each other in the second half. If the U.S. finds itself in a position where it is without McKennie or Adams, a Bradley and Trapp combination in the middle of the field could work.


Passing out of the back was a weakness


One of the disappointments from the game was how the U.S. team struggled for long stretches to play the ball out of the back. Tim Ream and Omar Gonzalez weren’t mobile enough and DeAndre Yedlin wasn’t able to get forward effectively. Matt Miazga wasn’t great in the first half but had a significantly improved second half.

Berhalter clearly wants his team to pass well out of the backline to move the entire team further up the field. In the months ahead, that will probably be his biggest focus.

The central defenders of John Brooks, Matt Miazga, and Aaron Long are probably the top three options right now and all three can pass well.

The fullback options will be interesting. Will Adams continue playing right back in a way that cuts in or will Yedlin start instead in the traditional approach (or will he play as a winger)? Since Nick Lima did not play in these games, is Adams the only player who can play right back as Berhalter wants? If so, does the entire formation change if Adams is injured/suspended? That will be a tough call for Berhalter as he probably wants to have continuity with his system even if not everyone is available.

Finally, left back continues to be a major concern and it fits into the team’s decades-old tradition of never having a dedicated and effective left back who is not a recent convert to that position (Beasley, Convey, Hedjuk, Bocanegra, etc). Is Berhalter going to stick with Tim Ream and Daniel Lovitz or are there any other players he is considering?