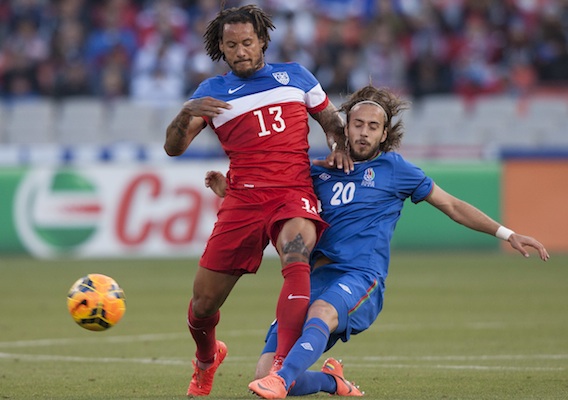 5 Thoughts on the U.S. vs. Azerbaijan Exhibition

Despite a 2-0 win over a weak Azerbaijani team, little was learned and the U.S. players played down to the level of its opponents. Brian Sciaretta shares his thoughts on the Send-Off Series opener.
BY Brian Sciaretta Posted
May 28, 2014
11:00 AM

1: This game resembled a January friendly against a CONCACAF opponent

It's impossible to take too much away from this game because it wass unlike anything the U.S. will be facing in Brazil. In fact, the competition more closely resembled the annual January friendly where the Americans are together for a long time before the game and then struggle against a weak opponent. Normally, that's fine. But this is the World Cup team and the tournament is just weeks away. In particular, the first half was tough to watch. Aside from Alejandro Bedoya’s aggressiveness, the U.S. was all pulled into mediocrity and looked lost from the run of play. In the second half, the players gradually began to take control thanks in part to strong play from substitutes Brad Davis, Mix Diskerud, and Aron Johannsson. It's easy for supporters to be disappointed in the lackluster game but it is easy to see the team playing better in a more open game against better opposition.

Throughout most of this cycle, Klinsmann has preferred the 4-2-3-1 formation with a pairing of Jermaine Jones and Michael Bradley in central midfield. In some respects, it was difficult because both players preferred to push forward and their roles were never completely defined. With the diamond midfield, Bradley is now the preferred attacker thanks to a strong outing against Mexico in April. In that game, Kyle Beckerman played the defensive midfield position at the back of the diamond and did the gritty work that allowed Bradley to thrive. The question then became whether or not Jones would be sufficiently disciplined to play that role. Against Azerbaijan, Jones played the defensive midfield role well and sat in front of the defensive line. His passing was solid and he did what was asked of him in the role. Azerbaijan was a weak opponent and the game did not offer much insight into the status of the U.S. national team, but Jones was a standout and looks ready to give Klinsmann what he needs from a tactical perspective against the tough competition ahead.


3: Brad Davis was the Man of the Match

It surprised many when Davis was named to the World Cup roster, but against Azerbaijan the Houston Dynamo midfielder showed the importance of a good left foot. His set piece delivery was deadly accurate and he was also good from the run of play. He completed a high percentage of his passes and nearly earned a penalty at the start of the second half. Davis was part of both goals and helped give the U.S. team an edge in the second half that won the game. Klinsmann likes Davis more than many people realize and it wouldn’t be surprising to see him play significant minutes in Brazil.

4: Timothy Chandler at left back has not improved much since 2011

There is a case to be made about Fabian Johnson playing right back. He played the position for Hoffenheim since January and progressively improved. He is naturally right footed but his strong left foot has always made him a versatile option. The question then comes as to why bring right backs Timothy Chandler and DeAndre Yedlin to Brazil if Johnson is the right back? Well, Chandler came on in the second half to play left back in place of DaMarcus Beasley and looked out of position. Chandler is right footed and his left foot is weak. He has never played on the left side for Nurnberg and the only time he played the position was with the national team in 2011. The situation has not improved and Chandler looked out of place on the left again. At some point, it seems like Klinsmann will revert to the seemingly obvious solution and put Johnson on the left where he has experience and move Chandler to the right where he is most useful.


5: Altidore needs to be more dangerous

It probably wasn’t much of a cause for concern that Michael Bradley had an off game since he has been playing very well for the national the past year. For Altidore, however, the situation is becoming more of a concern because he has been coming off a well-documented disappointing season for Sunderland. The danger is that it could carry over to the national team. Against Azerbaijan, his hold-up play was effective at times and he was involved, collecting52 touches. He seemed willing to drift back into the midfield to help create plays but he struggled to get anything going close to the goal. Chris Wondolowski failed to capitalize on his chances but he was in good position to score several times. Also, Aron Johannsson was able to step in and score in his limited minutes. Altidore has all the tools to succeed at high levels of international soccer. If he is on his game, he can be a deadly asset for the U.S. national team and one that could give the team a chance to advance in the group. If he is off his game, however, the U.S. will have a uphill climb. OK, your turn. Tell us your thoughts about Brian's thoughts in the Comments section below. Brian Sciaretta is an American Soccer Now columnist and an ASN 100 panelist. Follow him on Twitter.