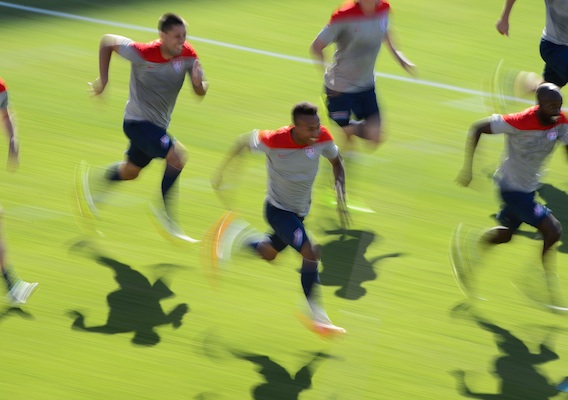 5 Battles That Will Define The U.S. World Cup Squad

It's a sprint now: Jurgen Klinsmann's 30-man provisional roster will have to be trimmed to 23 players by June 2, and ASN's Brian Sciaretta shares his insights on where the key battles will occur.
BY Brian Sciaretta Posted
May 17, 2014
1:14 PM
WHEN A REPORTER ASKED United States men's national team coach Jurgen Klinsmann why he named 30 players to his World Cup training camp, the coach said it was because “we have 50-50 cases all over the place going on.” Here's a look at some of the positional battles that will play out before the coach submits his final World Cup roster on June 2.

The fullback positions have been wide open throughout this World Cup cycle. With Steve Cherundolo injured for most of the last year and now officially retired, both right back and left back are unclear as camp opens. It seems likely that Fabian Johnson will return to left back at the World Cup since he has been the most consistent performer there. DaMarcus Beasley is the probably backup at that spot. Right back, however, remains a complete mystery. Heading into camp, Geoff Cameron, Timothy Chandler, Michael Parkhurst, Brad Evans, and DeAndre Yedlin have all played there over the past 18 months. At this point, Cameron seems more likely to shift to the middle and the young Yedlin is likely viewed as one for the future more than a candidate for this summer. Chandler is a true wild card here. If he performs well in camp and shows a strong competitive fire, he has the sort of talent and pedigree that could catapult him to the Starting XI. That would leave Parkhurst and Evans battling for backup right back. If Chandler doesn’t perform well, Evans and Parkhurst can both make the team but will be slugging it out for the starting role. So who has the edge right now? It seems likely that Parkhurst has edge at the moment. Evans’ most recent time with the national team came during the January training camp and he struggled. Parkhurst was able to play in the Mexico friendly last month and did well on the left side. Parkhurst has the ability to play left or right back, which gives options. Evans was once seen by Klinsmann as the first choice right back for the U.S. despite the fact he was a midfielder for Seattle. It could be now that his standing has slipped a bit and his competition with Parkhurst is one to keep an eye on in the upcoming games.

Klinsmann has repeatedly stated that Jermaine Jones and Michael Bradley are his first-choice central midfielders, and there is no reason to think that this has changed. So who backs up Jones and Bradley? Kyle Beckerman started and played very well in the recent friendlies against Mexico and South Korea. In addition, Beckerman has been playing some of the best soccer of his career since last summer’s Gold Cup, where he was the Man of the Match in the finals. Edu, however, has the experience. He has played in the Champions League for Rangers and was a member of the 2010 World Cup team. He had a rough time at Stoke City and rarely played but is now back on the field—and serving as a team leader—with the Philadelphia Union. It's possible to envision a scenario where both Beckerman and Edu make the World Cup roster—especially when you consider Jones' tendency toward accumulating yellow cards. But the most likely case is that only one goes to Brazil. At this point, Beckerman has the edge. He has done nothing to lose his spot on the team and has not had a bad game for the U.S. in over a year. For Edu to make the plane, he will have to play very well in camp and prove to Klinsmann that his elite athleticism is an essential for facing teams like Ghana, Portugal, and Germany.

Right now, Jozy Altidore and Aron Johannsson are locks at the forward spot. Aside from those two, Landon Donovan and Clint Dempsey can both play forward or the midfield. There isn’t that much room left for two more forwards. That leaves Terrence Boyd and Chris Wondolowski likely competing for one last spot. Boyd arrived in camp playing the best soccer of his career. He scored 20 goals this season for Rapid Vienna, including six goals in his last four games. He also plays the target forward role well and is one of the strongest players on the squad. Wondolowski has also been playing well recently for San Jose but his recent games for the U.S. senior squad have put him in the driver’s seat going into camp. In fact, Klinsmann even said as much. “He is a competitor,” Klinsmann said. “He is determined. You give him a one percent chance and he wants to make it 100 percent at the end of the day. He will be one of those drivers going into the next couple of weeks.” Right now, Wondolowski has the edge over Boyd but if Boyd continues his impressive run into the Azerbaijan and Turkey games, he could overtake Wondolowski for what is likely the last forward spot.

Klinsmann will no doubt wants to select a strong left-footed midfielder who has the ability to play wide. Assuming there were no promises made to secure Julian Green's international commitment, he and Brad Davis will have to slug it out to win this spot. Green, 18, has tons of potential and American fans are excited about his talent. The Bayern Munich product had a solid year for Bayern Munich's U-23 team but has not played since suffering a shoulder injury in last month's U.S. - Mexico contest. Davis is a very experienced player for the Houston Dynamo and can provide deadly service in attacking positions with his left foot. After watching last month’s Mexico friendly for a second time, Davis came across better than in my initial viewing—especially in his defensive play. Mexico had zero chances going down Davis and Parkhurst’s side of the field. Davis was always in a good position to defend well and his service was still strong. I think there is a good chance that both Davis and Green make it. Promise or not, Klinsmann rates Green highly. But who has the chance to see more minutes between the two? Fans may like the idea of seeing Green on the field, but I believe the answer heading into camp is Davis. Green will have to overtake Davis for minutes. It is no small accomplishment that Davis was selected to start over Landon Donovan against Mexico last month. He has professional experience and despite his Bayern Munich contract, Green does not. At the World Cup, the U.S. will be facing teams with superior talent, so defensive prowess and set piece efficiency will be crucial for the Americans. Davis delivers on both counts.


5. Brooks vs. Goodson vs. Gonzalez

With the numerous right backs called into camp, it looks like Geoff Cameron is going to be playing central defense which he believes is his best position. Matt Besler is also close to a lock heading to Brazil. That leaves three more central defenders on the 30-man roster who will be competing for two spots: John Brooks, Clarence Goodson, and Omar Gonzalez. It seems unlikely that Klinsmann will want to bring five central defenders to Brazil, so one of the three will likely not make it. Goodson has not been a regular starter for the U.S. but aside from one poor game on the road against Antigua in 2012, he has been solid contributor. While he did not play at the 2010 World Cup, he was on the roster. That makes him the most experienced international defender on the current squad. Gonzalez was once seen as the starting central defender for the U.S. but he has struggled of late, and following the recent Mexico game, Klinsmann suggested there is still competition in central defense. While Gonzalez may have lost his starting spot, he is likely still on the team for Brazil but is simply not a lock at this point. Brooks is an extremely talented central defender who was a stalwart in 2012-13 for Hertha Berlin in its successful campaign to get promoted to the Bundesliga. This past season was up and down but he ended the season on a high note. Still, his three starts for the U.S. have shown both his promise and his inexperience. At this point, Brooks enters camp needing to make up ground to avoid being one of the last players cut. He certainly has the ability to overtake Goodson or Gonzalez but he will need to have very strong outings against Turkey or Azerbaijan to do that. Even if Brooks doesn’t make the 2014 Word Cup team, he is likely a very big part of the team’s future and the Olympics in 2016 could be his breakout tournament. Who do you think will win these positional battles? We want to hear your take below, and we want to see your preferred 23-man U.S. World Cup roster right here.