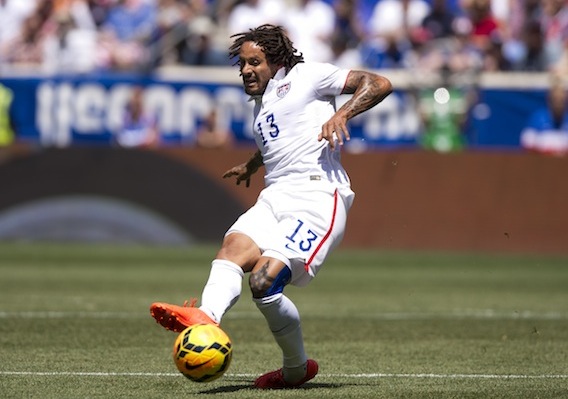 3 Thoughts on the United States' 2-1 Win Over Turkey

John Godfrey watched the game at Red Bull Arena. And then he watched it again when he got home. And then he wrote this piece, featuring three different observations gleaned from the contest.
BY John Godfrey Posted
June 02, 2014
10:11 AM

In a crowded—and, it has to be said, pungent—post-match press conference, Klinsmann went out of his way to single out Jermaine Jones' strong performance against Turkey. "Jermaine played a brilliant first half," Klinsmann told reporters, adding that the coach had decided before the match to sub out the Besiktas midfielder for Kyle Beckerman after intermission. It's hard to dispute Klinsmann's evaluation. Clint Dempsey may be the captain and Michael Bradley may be the engine, but Jones is the conductor of the U.S. national team. A vocal and demonstrative player, Jones was forever pointing and shouting and guiding the action during his 45 minutes on the field—telling Bradley when to switch the field, indicating where he wanted the central defenders to pass the ball, and never shying away from responsibility. Hey—somebody has to do it. The soft-spoken Chandler and Johnson aren't likely to take charge in that sort of way, and up until this point Geoff Cameron and Matt Besler haven't done so either. Klinsmann mentioned after the contest that he wished his defenders would communicate better, and more often, but he could have no such complaints about Jones. In fact, when Jones scored his goal and was celebrating with his teammates, Jones made a beeline to Klinsmann and spoke with him—somewhat animatedly—on the sidelines. What was Jones telling his coach? "It was some tactical stuff," Jones said. "I'm one of the older guys and from my position I can see the whole team, so when I have some time I talk with him. I was telling him that we have to switch one back, that we always play in the middle two against one. If Michael dropped back [he could] clean up on [Turkey's] No. 10. That was it." Jones wasn't being critical. He was just calling it like he saw it, and looking to fine-tune the diamond midfield ahead of Brazil. "We've played a lot of games together so we know each other," he said of Bradley. "Maybe Michael has to find out a little bit more in this situation what kind of position he's playing. He did it perfect in front so I have nothing to say. In defense we have to work everybody hard. We all have to work back." Unlike the Azerbaijan match, the Turkey contest felt big. World Cup warmup big—just the kind of game Jones loves. "It's my first World Cup," Jones said. "I can't wait for it to start, to battle with the best teams and the best players."

Never mind the missed chances. Forget about the less-than-stellar first touches. Sunderland? Ancient history. Jozy Altidore knows he will be starting at forward for the United States in the 2014 World Cup, and as he spoke with reporters after Sunday's match against Turkey, it was apparent that the 24-year-old striker is in a great—not good—state of mind. "Everybody is so worried about my confidence," Altidore said with a somewhat bemused smile. "My confidence is fine. It's not going to change if I score a hat trick or if I don't score at all. It's fine." Jozy! Jozy! If you gave that performance today against Ghana on June 16, would you be happy with it? "Doesn't matter how I play," he responded, again with a patient smile, "as long as we win." Is it the right decision? Does Altidore give the U.S. a better chance to score than, say, Aron Johannsson? It doesn't matter. Klinsmann is convinced that Altidore gives opposing defenders a lot to worry about, and he is similarly certain that the goals are coming. "What we all wish is that he puts the ball in the net," Klinsmann said after the match. "He keeps the other backline busy, and that's what the other coach sees." "It is the Jozy that what we want to see," Klinsmann said, adding that he hopes Altidore's lack of production in front of goal drives the player harder. "You've got to work for it. You've got to stay hungry."

Timothy Chandler, a right back asked to play on the left side for the U.S., did not cover himself in glory in Sunday's match. He was out of position on numerous occasions and his late giveaway led to Turkey's only goal. Aside from a very fortunate cross he did not make a positive impact on the attack. And whenever he had the ball at his feet he seemed anxious to get rid of it as soon as he could. It's not all that surprising. Chandler leans heavily on his right foot, and when playing at left fullback he is awkward on the ball. Further complicating matters, Chandler hasn't been a part of the U.S. setup for some while, and he seems out of sync with his teammates. "I think defensively, especially the first half, I think we needed to make some corrections at halftime," Klinsmann said after the match. "We needed to make it more difficult for the opponents to go through there." He was referring to the entire back line, but Chandler was the glaring weak spot. It will be very surprising if Chandler starts at left back against Nigeria on Saturday. But then, if Johnson moves back to the left, who starts at right back? A clearly struggling Chandler? A youthful DeAndre Yedlin? Cameron told me point blank that he "is a center back now for the U.S." and isn't even training at right back these days. As ASN contributor Brian Sciaretta said to me after the match, "The team could really use Michael Parkhurst right now." We'd love to hear your thoughts on Godfrey's thoughts—please share them below. John Godfrey is the founder and editor in chief of American Soccer Now.