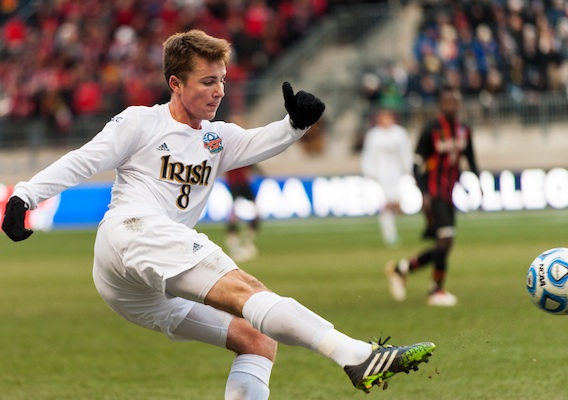 25 College Soccer Players You Need to Know About

ASN's Brooke Tunstall spoke to numerous MLS and NCAA coaches to craft this list of the most intriguing prospects in college soccer. Is the next Matt Besler or Clint Dempsey here? Entirely possible.
BY Brooke Tunstall Posted
August 29, 2014
2:45 PM
THIS IS THE TIME OF YEAR when Major League Soccer coaches’ jobs get harder. Sure, it’s the playoff crunch and teams are fighting for post-season positioning and the coaching staff is trying to win enough games down the stretch to justify being brought back next year. But that's only part of the story. MLS coaches and technical directors do most of their own scouting and with the college soccer season starting this weekend that means MLS coaches now need to find time to get to campuses to check out players who could potentially be on their rosters down the road. MLS teams often go a coach down in training as an assistant or even the head coach misses practice to allow for time to evaluate college players. For that reason, MLS teams often draft players from their own backyards because those are the players they found it was easiest to scout. It’s no coincidence, for instance, that the San Jose Earthquakes draft a lot of players from Northern California colleges while the Columbus Crew have a heavy Midwestern flavor. “It certainly helps your scouting, makes it easier if you have many programs, good programs, near your team,” said one MLS head coach. “Salt Lake, Houston, teams like that where there aren’t any, or many, colleges (with men’s soccer programs) nearby, it’s a lot more time-consuming to scout.” For all the growth that Major League Soccer has made the past decade, both in terms of size of the league and level of play, college soccer is still the lifeblood of the league. Fans may not want to admit it, but the bulk of players in MLS come from college soccer, something that is unlikely to change in the next few years. Simply look at the starting lineups of a given MLS game and count how many players are veterans of college soccer. Rare is the MLS game when more than half the lineup didn’t play college soccer. As with other sports, college scouting is a tricky business. The best college player isn’t always the best pro prospect. (Just gaze upon the pro careers of recent winners of the Hermann Trophy, given to college soccer’s top player every year, like Jason Garey, Joseph Lapira and Marcus Tracy.) MLS coaches need to rely on their own experience and a network of contacts in college soccer to decide whom to evaluate and then go from there. Traditionally, the teams that do the best in the annual MLS SuperDraft are the ones that have done their homework during the college season rather than relying on the chaos of evaluating players during the MLS Combine to make their college selections. To that end, American Soccer Now polled a selection of MLS and top college coaches to gauge who they'll be scouting this coming season. While thorough, this isn’t definitive and there will certainly be players not listed here who go high in the draft, and vice versa. Complicating college scouting in terms of the draft, many of the top prospects are alumnus of MLS academies, meaning they can be signed directly by their parent MLS club and kept out of the draft. “It’s really frustrating when you go and scout a game and you’re like, ‘Oh, I found a player’ and then he turns out to be from someone else’s academy,” said one MLS coach. “The players they develop, fine, I don’t have a problem with that. But I wish the league would do a better job of letting us know who other teams have (homegrown) rights to and who they don’t because it will impact if you scout a player more.” Because MLS doesn’t allow underclassmen into the draft unless they’ve signed a Generation Adidas deal, we’ve broken down the prospects by seniors and underclassmen. To get evaluators to speak openly on the players, coaches were granted anonymity.

Leo Stolz, M, UCLA—The German import is an adept playmaker who turned down a Generation Adidas offer to stay in school and finish his degree. A veteran of the 1860 Munich academy, the biggest knock on Stolz may be his love for the game. “Technically, he’s as good an attacker as there is in college. He sees the game and passes well and last year his finishing came together. But this is a guy who could have been a pro already a couple of different times. Is this what he wants to do?”
(Editor’s note: it would be unfair to not point out that Stolz transferred from George Mason after his freshman year in part to play against better competition and play before more pro scouts. Sure, he could have also gone for the weather, but that’s not the move of someone who isn’t thinking of a career at the next level.) Nick Besler, M, Notre Dame—Matt’s brother is somehow not a product of Sporting Kansas City’s academy and thus is draft-eligible. Unlike his brother, who starred for the U.S. backline this summer in Brazil, Nick is more of a holding midfielder. Like his brother, he plays a smart, clean game that shows a solid tactical awareness. “I wouldn’t be surprised if he goes first (in the draft), at least among seniors. He’s a safe pick because of the name and the Notre Dame pedigree and winning a national title. You know what you’re getting. He might not end up as good as his brother but he’ll be very good.” Dan Metzger, M, Maryland—A veteran of the New York Red Bulls academy, he’s a classic two-way midfielder who anchored the Terps run to the NCAA final. “He’s just a good, smart soccer player. He could step in to a lot of teams in MLS and play right now. Will he be a star? Maybe not but he should play a lot of years in the league. If he belonged to a different (MLS) team, he might not be back (in college) this year.” Sean Davis, M, Duke—Another New York Red Bulls academy player who has long had the eye of their technical staff. He's versatile enough to play centrally or wide. “I know the Red Bulls really like him and he had a great summer for their (amateur) NPSL team. It will be very surprising if they don’t sign him.” Spencer Richey, GK, Washington—The fifth-year senior “would have been the first or second goalkeeper taken” in the 2014 draft last year until he broke his leg in two places early in the season and had to redshirt. “Not the most impressive, physically, but he’s very fundamentally sound and so composed. Plays older than he is.” Oumar Ballo, D, UMBC—A native of Mali who grew up in Baltimore and has blossomed physically in college. Has the size (six-foot-two) to play center back and the pace, and skill, to play fullback. “He’s a tremendous athlete, probably as fast and quick as anyone in college soccer. But he’s also good on the ball. And he’s gotten stronger the past couple of years. If he had been in the (2014) draft he’d have gone high. He’s really quiet, though. He’ll need to work on that, especially if he plays centrally.” Robbie Kristo, F, Saint Louis—Already a two-time All-American, the six-foot-four target forward possesses strength and skill but has fought injuries that have raised questions about his pro potential. “He’s got a combo of skill and size you don’t see a lot in this country,” said one coach. But another said, “Twice I went to see them play and once he didn’t play and the other he came off the bench. You worry if he’ll hold up physically, especially being a target player.”

Boyd Okwuonu, D, North Carolina—He is an FC Dallas product, so he’s only in the draft if they pass, which seems unlikely. Though listed at five-foot-eight, he played center back well enough to be the defensive player of the year in the ACC, the top conference in college soccer, and is a veteran of U.S. youth national teams. Despite his resume, questions about his position at the next level linger. “Dallas needs to decide what they have in him. He’s done well (at UNC) in the middle (of the defense) but can he play there at the next level? He played (right back) for Tab (Ramos) with the U20s and didn’t look great. He’s a smart player and reads the game well but he might struggle physically. But a lot of us said the same thing about (LA Galaxy stalwart) A.J. DeLaGarza and look what he’s done.” Darwin Jones, F, Washington—Reportedly turned down a homegrown offer from the Seattle Sounders after a strong junior season, though the Sounders will most likely reclaim him this winter. “He’s a nice combination of athleticism and skill and he can play wide or up top. He’s a lot like (current Sounder) Lamar Neagle. It might take him a while to crack that (Seattle) lineup but he can play.”

Mahamodou Kaba, D, South Carolina—A native of Guinea who grew up in Michigan, Kaba was highly regarded coming out of high school amid rumors of an offer from D.C. United. But he barely played his first two seasons before becoming a solid starter for the Gamecocks last year. “You know how they say 'he’s built like a brick (you-know-what) house?' Well, that’s him. He’s so strong and athletic. If he has a season like last year, teams will notice. You could see him being a combine darling, too, if he shows well down there, because he looks the part.”

As noted, the coaches and scouts we contacted were reluctant to comment on freshmen. However, here are a couple of names that consistently emerged when asked about which first-year players might emerge as one-and-done candidates. Jeremy Ebobisse, F, Duke—The six-foot Maryland native scored a staggering number of goals last year for Bethesda/Olney in the U.S. Development Academy – 38 in 27 games. And few doubt he’ll be able to score at the college level. “He’s one of the best forwards to come into college soccer in years. I don’t think he’ll be one-and-done because Duke players don’t leave early. But he’s probably going to have a lot of interest.”
(Editor’s note: Andrew Wenger, who turned pro after his junior season, is the only Duke player to leave college before his senior season in the MLS era.) Abu Danladi, F, UCLA—Another Ghanaian from the Right To Dream Academy, he was named the Gatorade National High School Player of the Year last spring. “He could have signed straight from high school. Great feet, very technical.” Ahinga Selemani, F, Michigan—A former U.S. U-17 NT player in Bradenton, Selemani finally settled on the Wolverines after twice committing to other programs. “He’s a bit of a head case but he’s got a lot of talent. And given how late his commitment to Michigan was, it’s not like this was his lifelong dream to play there. If he has a good season you could easily see him leaving.” Which of these players will you be tracking during the coming NCAA season? Share your take, or tell us who we should have included, in the Comments section below. Brooke Tunstall is an American Soccer Now contributing editor and ASN 100 panelist. You can follow him on Twitter.