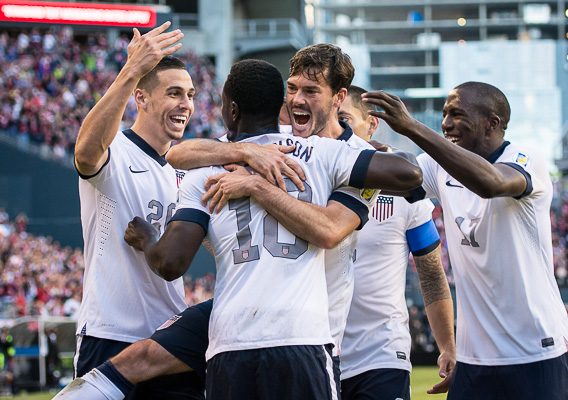 18 Reasons Why U.S. Soccer Owned the Month of June

Faced with three crucial World Cup qualifiers in the space of eleven days, the Americans ran the table and now sit atop the table. ASN editor in chief John Godfrey explores how it all happened.
BY John Godfrey Posted
June 22, 2013
9:58 AM

No. 18: Stuart Holden Came Back

Sure, he only saw a few minutes of action, but seeing Holden in the 18 lifted everybody's spirits. The Gold Cup is up next, and we'll all be watching Holden—and rooting for a continued recovery.

No. 17: Jeff Carlisle Spied for his Homeland

You thought he was an affable, mild-mannered ESPN soccer writer. You were wrong. Jeff Carlisle's espionage was directly responsible for at least two of the three points the U.S. earned against Honduras.

The diaspora that is the U.S. men's soccer team usually means that the players only get a few days to train together. But this time around they came together, stayed together, and played together. You could see the quality spike on the field, and you could see the players genuinely enjoying each others' company in training. A great sign for the team.

No 15: Michael Bradley is happy

That perennial scowl, all those anger-based yellow cards, are beginning to fade into memory. As the English say, Michael Bradley is enjoying his soccer these days. He seems like he's enjoying everything, actually.

No. 14: Role Players Stepped Up

Brad Evans on the roster? Brad Evans starting at right back? Brad Evans with the stoppage-time winner in Kingston, Jamaica? Yes, yes, and oh yes. Full credit to him and the man who started him.

No. 13: The Crowd Outside in Seattle

No. 12: The Crowd Inside in Seattle

Tim Howard didn't have to stand on his head or stop dozens of shots to help the United States get all nine points in the three Hex matches, but don't underestimate his contributions. With two young central defenders in front of him and a whole lot of questions at both fullback positions, Howard brought instant stability to the American defense. The end result, just one goal allowed across three matches, speaks for itself.

Altidore, one of the best players in the Dutch Eredivisie, has had his struggles with the U.S. national team in recent years. He hadn't scored in nearly two years. He routinely ran out of gas after 65-70 minutes. And he famously fell out of favor with Jurgen Klinsmann last fall over his questionable work ethic. But a rejuvenated Altidore turned it all around just in time for the June qualifiers.

As Klinsmann might say, "Jozy deserves a big compliment for his performance."

Honduras fought hard in Sandy, Utah, but it always felt like the United States was going to win. And it always felt like Altidore would be the man to ripple the back of the net for the Yanks. Sure enough, that's exactly what happened. The 23-year-old striker is starting to become ruthless and lethal—just like a certain blond German we all know and love.

No. 7: we just love this photo

Remember that scene in The Right Stuff? Sure you do. John Todd at ISI Photos captured that same magical glow with this photo. Brilliant.

No. 6: Zusi Made Us Forget Donovan

Klinsmann set himself up for some serious second-guessing when he left Landon Donovan off the World Cup qualifying roster. But Graham Zusi made his coach look smart, delivering quality crosses and solid play in both games he played. Will Donovan reclaim his spot on the team in time for the World Cup? He might, but don't expect this to happen at Zusi's expense. The Sporting Kansas City midfielder is officially a must-start for the Yanks.

No. 5: Clint is clutch as captain

He was an absolute beast for the United States earlier this year, tallying against the likes of Belgium and Germany. But Clint Dempsey did not dominate in any of the June qualifiers. He didn't score, and it wouldn't be a stretch to say that he struggled to find the game. But the newly anointed captain has delivered results in five of six Hexagonal contests—a great statistic for the man with the armband.

Eddie Johnson still seems lost more often than not, and you can practically feel America wince when U.S. soccer releases its Starting XI and Johnson is listed on the wing. But in that one magical moment against Panama, Johnson timed his run perfectly, brought down Geoff Cameron's pass beautifully, and placed his shot confidently.


No. 3: The Defense gained experience

Mistakes were made, yes, but it all worked out in the end. Omar Gonzalez and Matt Besler represent both the present and future of the American central defense, and the fact that they powered through these three matches, side-by-side, while only allowing one goal, is going to pay dividends down the road.

No. 2: The Team Played smarter

While there is plenty of room for improvement, the U.S. seemed more cohesive and thoughtful throughout the three June qualifiers. Ball control. High-defensive pressure. A shared sense of understanding. And if you want further evidence, check out Liviu Bird's great tactical pieces for ASN. He breaks down game film like nobody's business.

Many questioned his tactical savvy. Some of his own players anonymously questioned his leadership abilities. But Klinsmann has proven the doubters wrong, at least for the time being. The United States sits atop the Hexagonal after six matches, there is healthy competition at nearly every position, and the team is bursting with confidence as it goes into its summer break. You can't ask for much more than that. OK, feedback time. You buying any of this? Care to add to the list? The Comments section is now yours. John Godfrey is the founder and editor in chief of American Soccer Now.