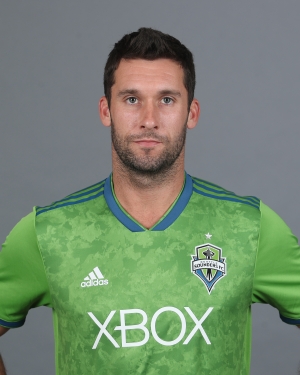 Some players rely on their size. Some are all about their touch. Will Bruin delivers a compelling combination of the two.

The 6-foot-2 target forward honed his game at Scott Gallagher's youth academy in St. Louis—an area that produced Brian McBride and Taylor Twellman—and continues to learn from Dominic Kinnear and Brian Ching. Bruin isn't afraid to throw his head into the mixer or beat a guy with skill. It's helped him become one of MLS's most promising, and prolific, young scorers.

Bruin spent three years at Indiana University, finishing second to Darlington Nagbe in the 2012 Herman Trophy voting before jumping to MLS. The Dynamo snapped up the Generation Adidas signee with the 11th pick of the 2011 SuperDraft. Bruin made an immediate impact, starting the season opener and appearing in 25 games. He netted a hat trick against D.C. United that year and scored five goals on the season.

Bruin promised to be more consistent in 2012 and has made good on that claim, scoring 12 goals in the regular season and four more in the playoffs as the Dynamo reached MLS Cup. Bruin scored eight more goals in 2013 (plus two more in the playoffs) and reached double figures in goal-scoring again the next season.

Bruin came off the bench to earn a pair of caps in friendlies in 2013 and was an unused sub on the team that won the Gold Cup that summer so he is on Jurgen Klinsmann's radar. And with a dearth of big forwards who can put the ball in the goal and Bruin being in his athletic prime - he'll be 28 at the 2018 World Cup - if he keeps producing in MLS he should get a shot with the U.S. -BROOKE TUNSTALL