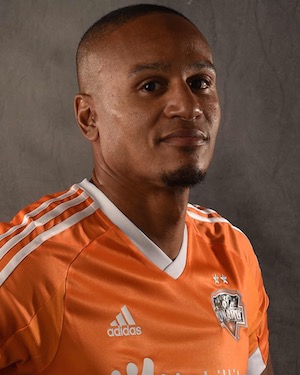 Ricardo Clark will never be the flashiest of players, but he uses his strength, athleticism, and quickness in effective ways. The midfielder prefers to break up plays and destroy attacks rather than wow the watching crowd with his physical prowess (although he can crack a ball if the need and space presents itself).

In 2003 the Atlanta-born midfielder left Furman—where he overlapped with Clint Dempsey—after his sophomore season to join the New York/New Jersey MetroStars. He was an immediate starter and also a fixture on the U.S. U-20 squad. Clark struggled the next year, and the MetroStars traded him to the San Jose Earthquakes before the 2005 season. He found his stride on the West Coast, earning the first of many senior team caps. In 2006 he was traded again, this time to Houston, where Clark helped the Dynamo win two straight MLS Cup Championships.

Clark established himself as a regular on the U.S. national team in 2007, earning a call to Bob Bradley's first training camp. He figured prominently in the center of midfield throughout World Cup qualifying and in South Africa. Clark's lowest moment as a player, however, came during the Round of 16 match with Ghana. Kevin-Prince Boateng stripped the ball from Clark in the fifth minute, raced in on goal, and scored.

"That was totally unacceptable for a player with my experience and caliber. I take full responsibility for letting my teammates down and I should have done better. This is on me," Clark said. "If that hadn’t happened, then things could have been different. I told the coach that it was my fault and that I was sorry."

Just before the World Cup, Clark signed with Eintracht Frankfurt and he joined the German club shortly after South Africa. He never found a steady spot and made only 12 appearances (and 15 during a loan stint with Stabæk) before returning to the Dynamo during the summer of 2012. Clark also bounced on and off the U.S. national team under Jurgen Klinsmann. He scored the game-winning goal against Venezuela in January 2012, finishing a Jermaine Jones corner kick in the 97th minute.

"I just wanted to provide some energy coming on to the field and help the team out,” he said after the match. “That's an ideal way to make an impression. I just hope there's more to come for the national team.” Given the glut of talent in the American midfield, Clark's future national team opportunities could be limited. But there’s a chance he could contribute some going forward, especially if he can regain his form in Houston.—NOAH DAVIS

"I knew that once he was on the field that he's a player that is technically very gifted and he can play one-touch football.... He gives you more speed with his distribution that helps." (January 2012)