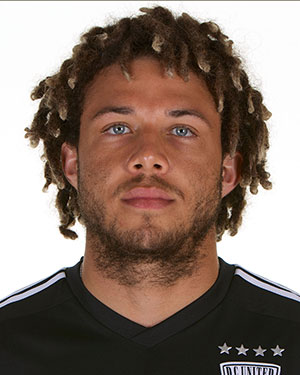 Nick DeLeon has an engine that rarely stops, a gift that helped the midfielder shine in his first year in MLS. That work rate, combined with the skill and soccer sense he inherited from his former international footballing father, has helped DeLeon climb the ranks of up-and-coming American talent.

After a four-year college career, DeLeon was the 7th pick in the 2012 MLS SuperDraft. He waited 13 minutes before scoring in his first game and endeared himself to D.C. United coach Ben Olsen through his hustle, hard work, and impressive on-the-ball skill. DeLeon tallied three goals and three assists in his first seven games. Like many rookies, DeLeon hit a wall midway through the 2012 season (a hamstring injury didn't help), but he kept fighting and regained his starting spot.

“I felt like mentally I got into a little slump," DeLeon told the Washington Times in August 2012. "So recently I’ve just really been focusing on amping my game up to the next level because you can’t be satisfied with where you’re at. So these couple weeks in practice, I've just been working hard, pushing it, trying to get to that next level." DeLeon still has a long way to go, but he cleared the first hurdle by getting back his spot.

The real question is whether DeLeon will hold out for the United States or play for Trinidad and Tobago. His father, Leroy, starred for the Soca Warriors, and his son may follow. The pair weren't close when Nick was growing up, but they have since become closer. "He reiterates that I need to play with confidence and play simple," the younger DeLeon said of his father (who coached Robbie Findley in Arizona). "Once you feel it, go at the defenders, don’t be worried whether you beat them, just keep going and play your game. He preaches it."

Trinidad and Tobago reportedly considered calling DeLeon for the Olympic qualifying tournament, but nothing came of the rumors. Still, the midfielder said he would consider playing for the country, and he will almost certainly have a longer national team career with the island nation. But if he continues to improve, Jurgen Klinsmann will likely show an interest in DeLeon too.—NOAH DAVIS