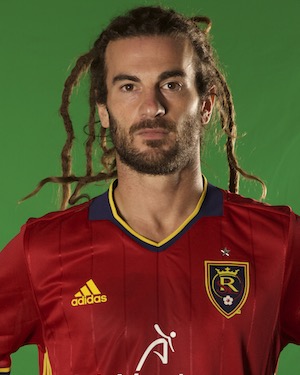 Kyle Beckerman is a U.S. soccer lifer, joining the inaugural Bradenton class that also included Landon Donovan, Oguchi Onyewu, and DaMarcus Beasley. He's a long-haired leader, a free spirit off the field and a pit bull on it. Beckerman will never be the best passer or most creative midfielder, but his heart, hustle, and desire gave him a second national team life under Jurgen Klinsmann.

The midfielder essentially willed himself to become a better player. He hacked out a role for himself with the Colorado Rapids between 2002 and 2007 before being dealt to Real Salt Lake for Mehdi Ballouchy. He earned his first full national team appearance in 2007, playing against Denmark in January and earning two more caps at the 2007 Copa America. While he flourished at RSL, he played a small role for the Stars and Stripes during Bob Bradley's tenure, providing experience and leadership on the B squad and occasionally providing depth with the A side.

Beckerman's fortunes turned when Klinsmann took the helm of the national team. The former German star appreciates what Beckerman brings, deploying him as a holding midfielder. Beckerman played well during an October 2011 loss to Ecuador. "It was a dream that died and all of a sudden it is back," he told Fox Soccer of his return to the national team fold.

Beckerman continued to rise up the depth chart under Klinsmann, culminating in him starting three games in the World Cup in Brazil, where he did a truckload of grunt work that finally earned him some attention for more than just his dreads. He was 32 in Brazil and holding midfielders don't tend to play internationally in their mid 30's but Beckerman's fitness and drive are elite and he's likely going to be part of Klinsmann's plans until someone younger comes along and beats him out.—NOAH DAVIS


"We discovered a player in Kyle Beckerman that is just doing a fantastic job for this team.... We don’t want to have him out of the team." (October 2011)

"Every coach has his own view of things and I have known Kyle since he has been playing in MLS and I have always followed him and always liked his style of play because he is a one thousand percent team player. He has a tremendous talent to read the game in advance, he kind of smells where the ball will go, and he can anticipate and move into that space and when he is there and faces people one-on-one, he is very straightforward in those challenges—he is fair but he is also physical." (October 2011)

"Is he the playmaker? No. That’s why he has a 6 on his back, not a 10. I don’t expect him to go forward and score goals and make the killer pass. This is not Kyle Beckerman. Kyle Beckerman is one that recovers me a ton of balls, backs up my two center backs, does that role, screens around there, and then passes it simply to the next guy." (January 2012)