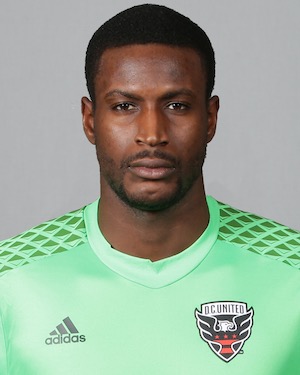 The prodigiously athletic Bill Hamid gets things done early. He was the first player to sign a professional contract from the D.C. United Academy and he was the youngest goalkeeper to earn a victory in Major League Soccer—a feat he accomplished on May 5, 2010. The previous owner of that record? Tim Howard, the American national team hero whom Hamid models himself after. "It gets me excited to see the attitude and the drive that [Howard] has," the young netminder told ESPN. "It is something I relate to."

Hamid is, according to many pundits, the U.S. goalkeeper of the future. Jurgen Klinsmann seemed to think so as well, bringing Hamid to plenty of early friendlies, and early in his tenure he proclaimed Hamid to be the team's No. 2 goalkeeper. However, due mostly to Howard's dominance at the end of the 2014 World Cup cycle he only had one cap, coming in a January 2012 friendly against Venezuela. Hamid is not taking anything about the future for granted—a topic he addressed in February 2012. "You can’t say I’m the backup until World Cup qualifying time or World Cup time," Hamid said. "I’m happy where I’m at, but it’s not finished. The hard work has to continue no matter where you stand."

As if to support his own comment, Hamid struggled throughout the 2012 Olympic qualifiers, especially on crosses. He didn't display—or generate—much confidence as the Americans failed to qualify for the Olympics. An ankle injury he suffered in the last match against El Salvador further hampered his development, and he missed the start of the 2012 MLS season. To his credit, Hamid fought his way back into D.C. United’s starting XI by May, but he was no longer No. 2 on the depth chart, having been beaten out as Howard's understudies by Brad Guzan and Nick Rimando.

Hamid kept plugging away at the club level and added consistency to his numerous athletic gifts and in 2014 he was named an MLS All-Star. He definitely remains in the U.S. goalkeeping mix, as evidenced by being named to the roster for a friendly with Ecuador in October of 2014.—NOAH DAVIS


"It seems like behind Tim Howard there was not a lot happening the last couple of years. We hope that with Bill coming in, the experience and environment of having Tim Howard next to him is almost like a mentor." (October 2011)