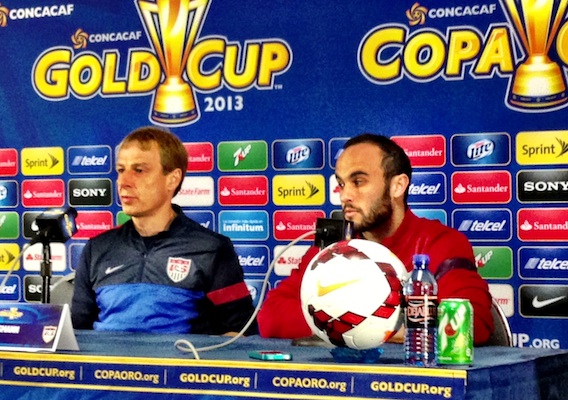 CONCACAF has suspended Jurgen Klinsmann for tomorrow’s Gold Cup Final, meaning he won’t be on the sideline for the match. Not everybody sees the situation in the same light.
BY John Godfrey Posted
July 27, 2013
5:47 PM
CHICAGO—Let's cut to the chase, shall we? Jurgen Klinsmann is suspended for Sunday's Gold Cup Final...so what does that really mean? How will his absence affect the contest, or will it?Here's what the coach and several key players had to say on the subject the day before the match.

"Responsibility is given to [assistant coaches] Andreas Herzog and Martin Vazquez both. They will share that responsibility on the bench. Most of the work will be done when we arrive at the stadium. We will do our pregame talk in the hotel. We will run through certain elements of the game this afternoon on the training field and tonight in our meeting. On the sideline it will be down to Andy and Martin."

"The boys know what we need to do. Jurgen will give us instructions for what he wants from us and all of that stuff before we go out on the field. Obviously, we’re going to miss him and his energy. He’s very energetic on the bench. He’s our coach, and he deserves to be on the bench. And for me, personally, he stuck up for me when they fouled me and [the referee] didn’t call anything. It’s disappointing that FIFA didn’t overturn the decision."

"I think, on the day, we’re losing a great motivator and a great leader. But I think the whole team has a ton of confidence in Martin and Andy. I think [Jurgen] is going to be missed, but he has already prepared us well—along with the other coaches—and I think we’re going to be fine tomorrow."

"I don’t think it changes anything as far as the team is concerned. We’re all onboard with what he’s trying to accomplish within this team, and it’s another game for us to get better as a team. There are some young guys in this team who haven’t won anything. They’re hungry and they’re looking forward to winning this cup tomorrow. It doesn’t change anything. We’re well prepared. You know football. You have to adapt to certain situations like this. It’s another test for us to show our true character tomorrow."

"We’re obviously disappointed. This month has been about a group of 30 to 40 people, together, doing something special. You would hope that every avenue is taken to [help keep someone] a part of a final. As a player, coach, staff member, it’s one of the biggest things in your career. You would hope every measure is taken to allow people to be a part of it. Unfortunately that’s not the case here, so we’re all disappointed. That being said, when some players couldn’t play or have been selected to start on the bench, other guys have stepped up and done a great job. And I feel the same way about our coaching staff. We’re going to use it as a little bit of a rallying cry. We’ve built something really special here and we want Jurgen to be part of it and we want to win a trophy for him."
That's what folks within the team have to say on the subject. What do you think? Will Klinsmann's absence matter? Will it give the team extra motivation? Share your thoughts below. John Godfrey is the founder and editor in chief of American Soccer Now.