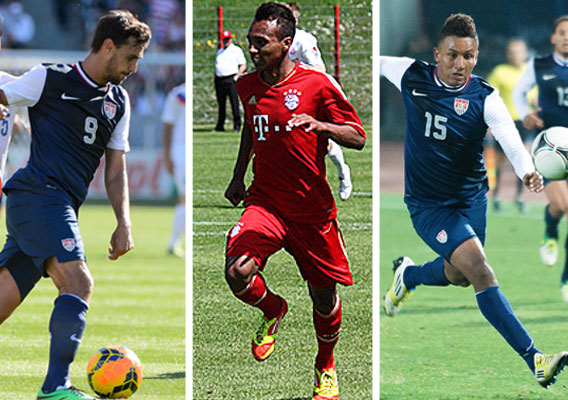 Who Will Secure 23rd Spot On U.S. World Cup Roster?

Jozy Altidore, Aron Johannsson, and Eddie Johnson are likely on the squad. So if Jurgen Klinsmann has one more slot for a forward, who is it going to be. Jason Davis shares his thinking.
BY Jason Davis Posted
February 19, 2014
11:45 PM
FIRST OFF, LET'S ALL AGREE that Jurgen Klinsmann is going to do the obvious thing and take four dedicated forwards to the World Cup in Brazil. He doesn’t have to, you know. Landon Donovan can play up top, roaming off of a target forward, and Clint Dempsey has spent more than a little time manning the front line in a U.S. shirt. Klinsmann has options thanks to his versatile attacking midfielders, and that’s bad news for the fringe forwards hoping to make the flight to the land of the samba. That aside, Klinsmann has several legitimate options for the fourth forward spot. The candidates include a World Cup veteran; a couple of wunderkinds of immense, but mostly unrealized potential; a maturing target man plying his trade in a second-tier European league; and two prolific MLS scorers. Handicapping the field is a matter of sussing out clues from Klinsmann, determining practical team need, and reviewing recent playing form.

There are six names on the list. We might be better off assigning a player to each number and rolling a die considering how difficult it is to choose between them. We won’t, but it could give us just as much of a chance of being right. But break it down we shall, starting with the current dual-international It Boy, Julian Green. The Bayern Munich reserve player is the fan favorite based on American Soccer Now’s latest poll (at right; you can vote here), a somewhat surprising development that is a little less so when the recent buzz behind his pending international choice is considered. Green is hot, in the same way Aron Johannsson once was and John Brooks still might be. His talent is obvious, his pedigree enticing. Green has shown just enough of an interest in playing for the United States that he has us all believing he just needs one more push to declare for the Stars and Stripes. Green is also talented: Check out this classy finish from Bayern Munich’s winter break, when the 19-year-old scored against Sudanese side Al-Merrikh: His numbers for Bayern Munich’s reserve side, which plays in Germany’s third division, are staggering. In 18 appearances (13 of them starts), the Tampa-born forward has put the ball in the back of the net 15 times. There isn’t another player in the pool that comes close to that type of goal-scoring return. The problem? Green is 19 and does not have a first-team Bundesliga appearance for Bayern Munich. He’s all potential. In a non-World Cup year, a call-up based solely on that potential and a Regionalliga resume might be enough (see Boyd, Terrence). Especially if doing so would nudge Green toward choosing the U.S. over Germany, the other country eyeing his services. But is that really the way Klinsmann wants to use the final forward spot on his World Cup team? No matter how infatuated Klinsmann is with his young countryman (and he clearly is), it doesn’t seem likely. Green is on the radar, but he’s not ready for the 23-man roster. Sorry, voters. Meanwhile in neighboring Austria, Terrence Boyd’s star is not what it once was. That’s probably unfair to the 23-year-old Rapid Vienna striker, but after his own brief stint as the young German-American of the moment, there was always going to be a cooling down period.