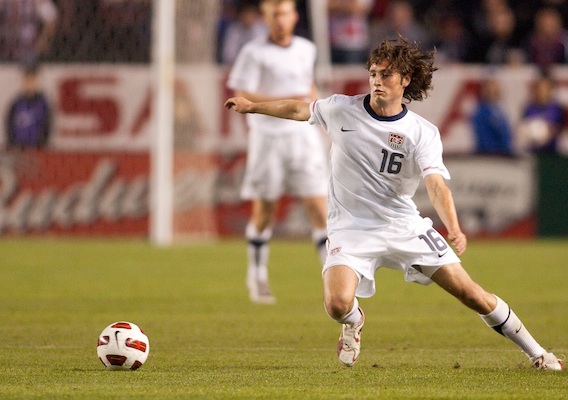 Where Were They Then? The U.S. World Cup Rookies

Jurgen Klinsmann's 2014 World Cup roster features just six players with World Cup experience, so we took a look back to see what the other 17 players were up to four years ago.
BY Blake Thomsen Posted
June 11, 2014
6:07 PM
WITH 17 WORLD CUP debutants, the U.S. is one of the least experienced teams heading to Brazil. So we thought we’d take a look at where the 17 World Cup first-timers were four years ago. Back then, some seemed destined to be here, while the majority looked like incredible long shots. Here are quick takes on the 2010 status of all 17 players.

Nick Rimando
Thirty years old in the summer of 2010, Rimando very well may have thought his national team career was over after he didn’t make the cut for the World Cup in South Africa. He was in the midst of a historically good campaign for Real Salt Lake, which set an MLS record for fewest goals conceded. He’d also won the MLS Cup MVP in November of 2009. None of this was enough to help him edge out Marcus Hahneman for the third goalkeeper slot, which looked like the potential nail in the coffin for his international career. But he continued his excellent form for RSL, and now he is participating in his first World Cup.

Matt Besler
Besler was a high MLS draft pick (eighth overall in 2009) after an excellent four years at Notre Dame, but few would have pegged him as a future World Cup squad member back in 2010. Especially then, Besler wasn’t seen as much of a national team prospect, and he looked destined to be far behind the U.S.’s existing center back corps of Oguchi Onyewu, Carlos Bocanegra, and Clarence Goodson. At the time, younger players like Omar Gonzalez, Gale Agboussomonde, and George John were also much hotter prospects than Besler. His quote from earlier this month suggests that he never thought too highly of his chances. “I guess I dreamed of playing in the World Cup, but honestly—not really.” John Brooks
Outside of Julian Green and DeAndre Yedlin, Brooks may be the unlikeliest member of the 2014 World Cup squad. Few could have confidently predicted that he’d choose to represent the United States, and even fewer could have predicted that the then 17-year-old would be playing at a World Cup level by now. Brooks’ flashes of occasional brilliance in the Bundesliga proved enough to get him on the squad. Geoff Cameron
Cameron was definitely something of a late bloomer, drafted 42nd overall in 2008 and not turning too many heads early in his MLS career. Four years ago, Cameron was sidelined with a knee injury and watching the 2010 World Cup, and his inclusion in the 2014 squad likely seemed a massive long shot.

In a recent interview, he explained that he’s always been more focused on the day-to-day process than big goals like the World Cup, especially because he wasn’t highly touted out of high school. “When I first went to college, I just wanted to get on the bench, I just wanted to make the team.” Timothy Chandler
In 2010, the then 20-year-old Chandler probably never envisioned he’d be playing in a World Cup. He wouldn’t play a minute of first team football until 2011, and few Americans knew he existed until he started to break out in early 2011 for FC Nurnberg. His national team career has been famously tumultuous to date, but he’ll have a chance to shift the perception in a big way in Brazil. Omar Gonzalez
In a sense, Omar Gonzalez’s inclusion on this roster may have been the most “predictable” of any of the 17 World Cup debutants. Gonzalez has always been on the fast track, a fixture in U.S. youth national teams since 2005 and the third overall pick in the 2009 MLS draft. Gonzalez was MLS Rookie of the Year in 2009 and a MLS Best XI selection in 2010. His inclusion on this team always looked likely, and generally strong performances for club and country ensured that it became reality.

“It’s a big deal because it’s been my dream since I was young,” Gonzalez said of his roster inclusion. Fabian Johnson
Johnson was involved in the German youth setup at every level from U-17 to U-21, and 2010 saw him one year removed from a UEFA U-21 European Championship. Thus it would have obviously been highly unlikely at the time to assume that he’d ever play for the U.S., let alone in a World Cup. But shortly after Jurgen Klinsmann took over in the summer of 2011, Johnson arrived in the U.S. team, where he has thrived ever since. DeAndre Yedlin
Four years ago, DeAndre Yedlin was an ordinary (but admittedly probably very fast) 16-year-old growing up in Seattle who played for a local club called Crossfire Premier. By the end of 2010 he was in the Seattle Sounders academy, and after a meteoric rise that included a two-year stint at Akron University, he’s now on his way to Brazil as MLS’s first-ever homegrown player to appear in a World Cup.

Kyle Beckerman
Like Brad Davis and Chris Wondolowski, who were also 28 at the time, Beckerman must have feared for his international future when he didn’t even come all that close to making the 2010 World Cup roster. But the appointment of Klinsmann in 2011 sparked his international renaissance. After the success of the U.S.’s Christmas tree formation on Saturday against Nigeria, Beckerman looks a likely starter. Alejandro Bedoya
If we’re going strictly off where players were four years ago, then it’s no surprise that Bedoya is on his way to Brazil. The then 23-year-old was one of Bob Bradley’s last cuts before South Africa, and Bedoya’s international career looked like it had a bright future. But uncertain club situations and the appointment of Klinsmann saw Bedoya fall into an international abyss for a two-year stretch before he was finally called back in for the 2013 Gold Cup. “It's incredible how much four years changes in things like that,” Bedoya said in a recent interview with American Soccer Now. “I always kept my head up and I was always confident in my own abilities.” Brad Davis
In 2010, the then 28-year-old Davis’s chances of playing in the 2014 World Cup looked virtually nonexistent. At that point, he’d played a total of 149 minutes for the U.S. since 2005. He remained in international exile until 2013, but some strong MLS performances earned him the favor of Klinsmann and he now finds himself an unlikely member of the U.S. World Cup squad. "Tons of emotions for me. This is a lifelong dream and a mission for me,” Davis said upon hearing he had made the final 23. “It's been an emotional few hours and I’m unbelievably excited right now.” Mix Diskerud
After switching his allegiance from Norway to the U.S. in 2009, Diskerud always seemed a possibility for this World Cup, even back in 2010 when he was just 19. With steady performances for club and country, he has gradually worked his way up and is now a potential difference maker in Brazil. Diskerud was clearly pleased with his selection.

My thoughts on making the World Cup team: pic.twitter.com/uokAWE6FQU

Julian Green
Back in 2010, even the most intense of U.S. prospect fanatics probably didn’t think Green had even the slightest chance of making the 2014 World Cup roster. Primarily, he was just 15-years-old at the time. You can usually count on one hand the number of teenagers at a World Cup, so no one could have reasonably expected Green would make a World Cup roster. The other issue was which country’s roster he could be on in the first place. He was so young that he hadn’t even played for German youth teams yet, but there’s little indication that the U.S. was a realistic option until Klinsmann came around in 2011. Yet here we are, with the Bayern youngster in Brazil and with a chance to be the youngest player in U.S. World Cup history. Jermaine Jones
Along with Gonzalez, Jones’ inclusion is probably the least surprising of anyone on this roster when looking back to the situation in 2010. Jones would surely have made the 2010 roster if not for injury, and thus it is not the least bit unexpected that he made the squad this time around. Graham Zusi
Zusi was drafted by Sporting Kansas City in the same draft as Matt Besler, and his ascent to the national team is perhaps even more unlikely than that of his club teammate and good friend. Zusi wasn’t anywhere near any prospective national team pictures until the 2012 January camp, and even still he looked a massive long shot. He expressed similar sentiments as Besler about how he once felt about his prospects of playing in a World Cup. “You don’t think it’s ever really going to happen,” he explained. “It’s something that I’ve dreamed of, but I don’t know if I ever thought it was going to become a reality.”

Aron Johannsson
Johannsson is another whose 2014 World Cup prospects looked extremely unlikely back in 2010. Four years ago, he was banging in goals for Fjolnir in Iceland, but few in America knew who he was, and he was still years away from being a World Cup-caliber player (or even a U.S. player at all). The rest is history, though, as a progression from the Danish league to the Dutch league—complete with dozens of goals—and a FIFA one-time switch back in August 2013 have seen Johannsson become a potentially integral member of the Yanks’ 2014 squad. Chris Wondolowski
Wondolowski’s appearance on this roster has a lot of similarities with his good friend Brad Davis’s inclusion. Like Davis, Wondolowski’s 2014 World Cup hopes looked almost nonexistent at the time of the 2010 World Cup. But that 2010 season began his rise for the San Jose Earthquakes, and he gradually worked himself into the national team picture and favor with Klinsmann. “There aren’t enough words to describe it,” Wondolowski said of his inclusion. “I always had the dream.” Who do you think was least likely to make this roster four years ago? Who has had the craziest journey to the final 23? Let us know in the comments section. Blake Thomsen is an ASN contributing editor and you really should follow him on Twitter. He has so few followers that he responds to every tweet you send him.