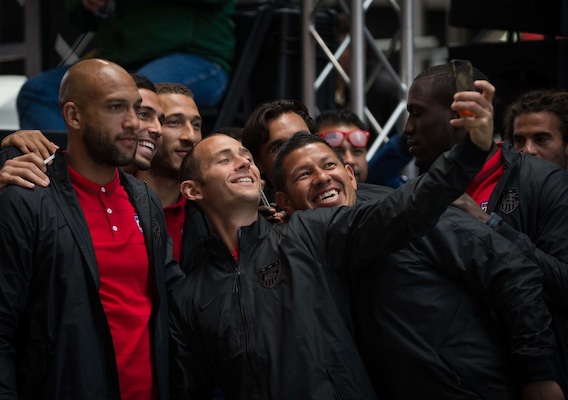 Never mind the three guys in the foreground: what is Jermaine looking at/thinking about?

Looking forward to returning to my old/new home, next stop NY!! ?????? @Jermainejunior

Making the first of many appearances on Tweets of the Week.

Take a moment today to remember those who have served & those who continue to serve for our freedom. ????????#HappyMemorialDay

Snoop showing some love for the USMNT!

Shout out to Uncle @snoopdogg for showing love, and chehadetheking for making this happen. http://t.co/tSXIfkuVOE

Can you count all of the Britishisms in this Tweet?

Explain why some lorry drivers feel they have a divine right to be a complete arse on the motorway?

Nothing even to be sorry about , Dos a Cero will forever be glorious.

Timestamp on this Tweet was right after he scored on Tuesday; looks like Aron has mastered time and space. But can he get into the Starting XI?

Another week, another really easy pick for No. 1 Tweet of the Week.

HAHAHAHAHAHA DONOVAN HAHAHAHAHA I DIDNT EVEN NOTICE HE BROKE THE MLS GOAL SCORING RECORD UNTIL MY PHONE NOTIFIED ME ???????????? HAHA #LegenD