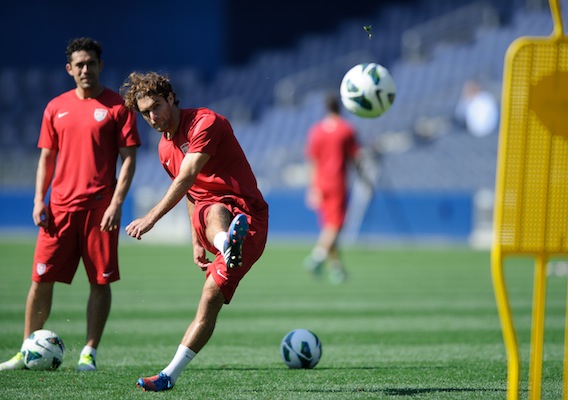 KANSAS CITY—When Livestrong Sporting Park plays host to its first World Cup qualifier tonight, it’s expected to be a raucous, sold out stadium full of cheering supporters. That should seem pretty normal for Graham Zusi, a midfielder for usual tenants Sporting Kansas City who is looking forward to the reception.

“I think it’ll be incredible. I don’t think it’ll just be myself. I think it’ll be all the players who are on the pitch [in awe of the atmosphere]," he said. “But it’s a little bit special for me just because of the hometown fans. It’s going to be an incredible feeling coming out and playing at your home stadium.”

But what impact can a crowd actually make?

“It’s important,” said Tim Howard, the American goalkeeper. “We’re looking to have a pretty strong home-field advantage here in Kansas City. In Columbus [where the U.S. beat Jamaica], it was very similar to that. We’ve not always had a pro-U.S. crowd, but this is a city where we do. We feel really comfortable as I mentioned yesterday. It’s going to hopefully pay dividends for us and get us through this group.”

There’s more to being at home than just having the support of the crowd, though. Clint Dempsey noted the influence the supporters can have on the way a match is officiated.

Back line changes?: Injuries and sicknesses have hit the U.S. back line, and Carlos Bocanegra’s uninspiring performance as a fill-in left back have many worried about how the unit will preform Tuesday. Howard, the man who will be called upon to clean up any mistakes, said consistency is ideal, but not always an option.

“I think you look at the best teams around the world, club teams, international teams, you don’t change your back four. If everyone’s fit and healthy you don’t change your back four or your goalkeeper. That’s what solidifies teams,” he said. “We’ve had a little bit of bad luck with some injuries and guys who weren’t available for selection for whatever reason, so continuity’s important. The more we can get, the better, but having said that, if you have to make a change, you make a change and then get on with it.”

Eddie Johnson ready: After scoring twice against Antigua and Barbuda, Eddie Johnson is likely to make another appearance in the Red, White, and Blue. The four-day turnaround time will be much shorter than the two years it had been since his previous national team appearance. He credited getting consistent playing time with Seattle as the reason he was able to step in and perform well for the U.S.

“I think it’s just playing on a week in and week out basis in Seattle, the confidence. I had a lot of confidence before I went over to Europe when I had my breakout year in Kansas City,” he said. "When you’re in and out of teams and playing for five minutes or you’re starting and you don’t play for another 15 games, you don’t have confidence when you’re out there on the field.

“You play it safe. You play not to make mistakes. If a play doesn’t go your way, you’re always looking at the bench thinking the coach’s going to pull you off, so just playing week in and week out now and scoring goals which is really important for a forward.”

Johnson said whatever Jurgen Klinsmann asks of him, he’s prepared to deliver Tuesday.

“I guess whatever my role is tomorrow, I’m pretty confident,” he said. “We’ve been working really hard in camp. It’s good to be around familiar faces and push each other and compete in these training sessions and prepare each individual for whatever their role is tomorrow, but I’m ready. Couldn’t be any more ready.”

To see where Howard, Johnson, and Zusi rank in the ASN 100, click here. (And be sure to interact with the rankings by clicking on the category tabs.)And here are Zusi's answers to the ASN Questionnaire.