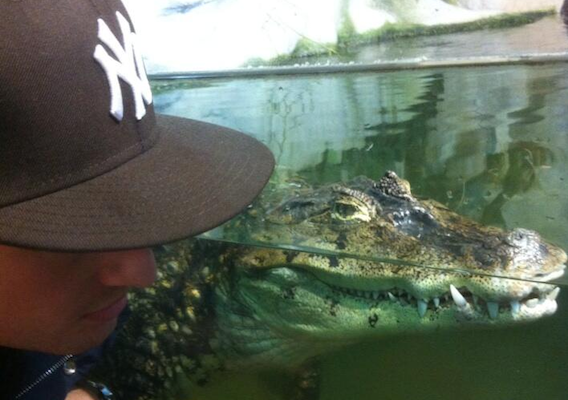 The United States national team midfielder finds a friend at the aquarium; Jay DeMerit musses on post-op problems; Geoff Cameron risks life and limb by getting into Brek Shea's whip.
BY Jesse Yomtov Posted
March 09, 2013
10:07 AM
10. Herculez Gomez: It was so endearing when we were in junior high…

Dear Abercrombie & Fitch, Your music (and smell) are noticed by all who pass by. This isn’t a rave. It needs to stop. Sincerely,Everyone

9. DaMarcus Beasley: Even Comcast wouldn’t do that…

Forgot to pay my damn cable bill.. Now i have no tv for the evening! Anyone want to keep me company???

8. Alejandro Bedoya: I just tried tying my shoes without using my thumb and was ultimately unsuccessful

Never realise how important your thumb is until it takes forever to tie your shoes!! twitter.com/AleBedoya17/st…

7. Terrence Boyd: If anybody has ever successfully taken a power nap, please shoot some advice to Terrence (and CC me)

6. Brek Shea: This seems like Brek’s Hail Mary attempt to get with Taylor Swift, and we completely approve

Does @taylorswift13 date ppl and breakup with them just to write new songs?

5. Mix Diskerud: The kid is a master of opportunistic photos

Just me and my bro, "Crock", hanging out. twitter.com/MixDiskerud/st…

4. Juan Agudelo: Hey man, if there’s nothing else to do…

Wat? 30% increase in New Jersey babies born this July because of the hurricane sandy blackout. (Explain)u were only born cus my phone died?????

3. Eddie Johnson: This is in fact, the American dream

2. Jay DeMerit: The whole endeavor really should have been live-tweeted

Pain killers make u constipated. But I just poo'd!!! It's the little things. #RoadtoRecovery #GoCaps

My driver this am!! Definitely not letting him drive again! #stayinbetweenthewhitelines twitter.com/GeoffCameron/s…