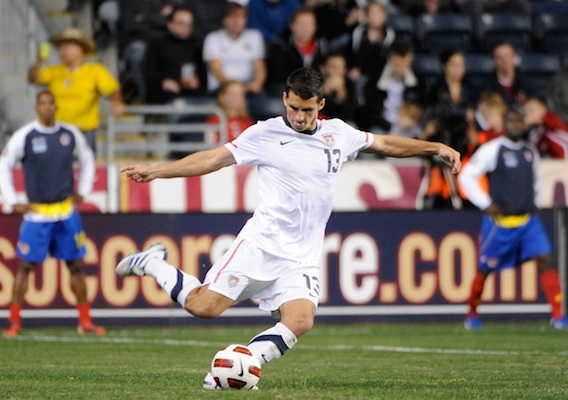 Letter to Jurgen: It’s Time We Talked About Fullbacks

In this open letter to Jurgen Klinsmann, ASN editor in chief John Godfrey proposes a few options at the most problematic position for the U.S. men's soccer team—fullback.
BY John Godfrey Posted
August 27, 2013
11:11 AM
Dear Jurgen, Dude! Congrats on the 12-game winning streak! Those 4-3 wins over Germany and Bosnia were both awesome, and I don’t really care if you had a few Belizean gimmes in between. A dozen. An all-time U.S. record. Fan-fricking-tastic stuff. And hey—that Aron Johannsson is something else, isn’t he? He may look like Kevin Bacon but he reminds me of Justin Timberlake—a versatile talent at the top of his game who can score at will. We need-need-need that guy up top. And John Brooks will look mighty fine in a U.S. kit by the time Russia rolls around. Great gets, both of them. Again, congrats. So yeah. Um. The reason I’m writing today…the fullback situation...what are we going to do about it? I thought the left side was settled when you brought Fabian Johnson into the team, and part of me still hopes you stick him back there and let him do his thing out of the back. But yeah, every time you put him out on the left wing he looks great too—creating trouble for defenses or flat-out creating goals. The thing is, if FJ moves up to the midfield, who sits? Michael Bradley and Jermaine Jones are going to play in the middle of your 4-4-2, and Jozy Altidore will be starting at striker—that’s pretty clear. (Right? Just wink if I’m right about this.) With FJ on the left wing, that leaves Clint Dempsey, Landon Donovan, and Graham Zusi fighting for two starting spots. Can you really sit any of those three? And if Johannsson keeps playing like he has been—and I think he will—how do you keep him out of the lineup? Any way you slice it, starting FJ on the wing forces you to bench one, and perhaps two, of your best players. Brutal.

I do. Eric Lichaj. You know him, right? Five-foot-eleven, 175 pounds, 24-years-old, hails from the unfortunately named Downer's Grove, Illinois. Fast. good one-versus-one defender. Bit of a mean streak. Never gives less than a 100%. Not error-prone. Can stay at home or push into the attack. Lichaj made 23 appearances for English Premier League side Aston Villa last season. He's now the starting right back for Nottingham Forest of the English Championship. Four games, four starts. He looks very, very solid in the position. English soccer fans tend to hate everything, including themselves, but on sites like this one, all you hear is love for Lichaj. "There won't be a Villa fan commenting on here that will have a bad word to say about this guy, sad to see him go, good player who gives everything. Good luck Eric, wish we'd kept you." and "This is a real coup for the Forest. From a Villa fan to you, you won't be disappointed. All of us are disappointed to have not kept him, but at his age he needs to be getting games. On his day he's kept Moses and Bale in his back pocket, he has plenty of pace. Getting forward he has a cracking shot as well. As he learns a little bit more discipline he will easily develop into a premier league level talent with the right level of games and coaching. Good luck to him!" and "Forest getting a real gem here, especially on a free. Top professional, goes about his business well. Watch out for his long throws, could add a real attacking threat for Forest next season! I was really sad to see him leave Villa, but he needs regular football with WC around the corner! All the best Eric!" I've watched a ton of Villa games over the past few years, and I couldn't agree more. Lichaj has eight caps to his name, Jurgen, but do you know the last time he played for the United States? I do. I looked it up here. It was June 25, 2011—when Bob Bradley was still running the show, a month before you took over. Back in May 2012 you said that Lichaj needs more games. Well, he's got more games. So what's the holdup? Call him in already. It wouldn't be the worst thing in the world if Lichaj joined the team in Costa Rica, practiced with the guys, and got accustomed to your system. He doesn't have to play, but he should be in the mix. Watch him train alongside Evans and see what you think. Maybe Lichaj doesn't have what you're looking for at right back, but he certainly deserves a shot at a position where you're taking a look at everybody under the sun. Evans has done a decent job as a stopgap measure, but he's a midfielder. Parkhurst cannot even get into the 18 for Augsburg. Cameron is intriguing but needs to find a position, and fast. Chandler? He's all over the place. It's time to see what Eric Lichaj can bring to the U.S. national team, Jurgen. Do it. Sincerely, JHG John Godfrey is the founder and editor in chief of American Soccer Now.