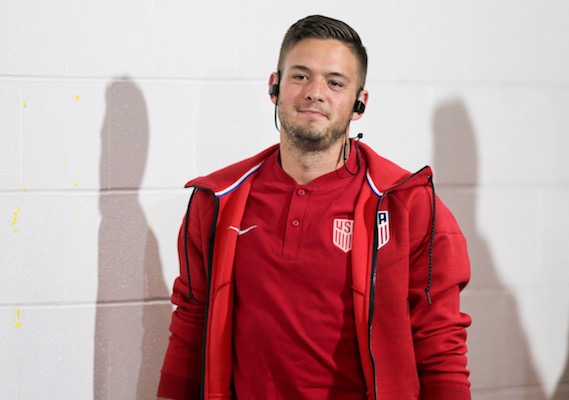 Kelyn Rowe to ASN: "There Are Things I Can Do Better"

The 25-year-old New England Revolution attacker spoke about his time with the U.S. men's national team, the lessons he learned with Bruce Arena's squad, and his drive to return to the international stage.
BY Brian Sciaretta Posted
July 18, 2017
7:55 PM

BRUCE ARENA said he wanted to give opportunities to new players during the Gold Cup, and the U.S men's national team coach did just that.

Consider Kelyn Rowe, the New England Revolution attacker who earned his first callup last month and proved to be one of the most impactful contributors during the Gold Cup group stage. Despite his best efforts, Rowe was one of six players cut from the squad ahead of the knockout stage, which resumes Wednesday in Philadelphia.

Rowe, 25, had some definite highlights in the Gold Cup, scoring an important goal against Nicaragua that helped assure first place in Group B and he also assisted on Dom Dwyer’s goal in a 1-1 draw with Panama.

That said, Rowe knew it was going to be tough to stick around for the second phase of the tournament. Fans and the media may have been surprised by his dismissal from the squad but Rowe recognizes his game needs to be more well-rounded for the international stage.

“We always knew it was a possibility because [Arena] was making six changes,” Rowe told American Soccer Now. “We knew the guys who were going home already because of obligations. But there were a couple of spots left over and we obviously knew it may come—I was hoping that it didn't. I was keeping a positive mind that it wouldn't come, but it did—unfortunately."

So what does the former UCLA star need to do to improve his game?

“I think it's the little things,” Rowe said. “I thought it was very positive in a sense that my attacking cleverness was there. But on the other side of the ball, can I learn how to hold a guy in front of me rather than let him turn? Do I know when to pressure or when not to and cut off a pass? Then, on the offensive side, know when to hold the ball and not try to make the dangerous pass—no matter if it's there. Sometimes we've just defended for 20 minutes and we need to keep the ball.”

Arena made a point of saying that all of the players released from the squad showed well and are in the mix for future call-ups. Rowe had an exit meeting with Arena and his staff and that conversation left Rowe with a clear sense of what he needs to do to earn a spot with the national team.

“I got a good amount of minutes under my belt with the international squad," Rowe said. "It's not like I just dipped my toe in. But there is a lot to learn. The scoresheets and the number of minutes may say one thing, but the film might say another. I credit the coaching staff—and Pat Noonan was very good with me. We would go in and watch touches—what was good, what was bad—what was I thinking here? Positionally as well.

“That kind of helped me grow as a player and I thought I got better each game in that sense and he agreed,” Rowe continued, referring to Arena. “But he also said there's a chance I don't play in the next few games and if I do, it'd be very minimal minutes. He wanted me to come back and get real minutes with my club team—which is going through a rough time.

'And he gave me a challenge: 'Make sure you still progress and make sure you turn this team around. That will show me that you're ready again.' So I have a little fuel to the fire in that sense—to get back. So it was a good exit interview.”

New England is indeed happy to have Rowe back. The club has struggled through four straight losses in league play and was also bounced from the U.S. Open Cup by the New York Red Bulls. The Revs are now in 10th place in the 11-team Eastern Conference.

Rowe is eager to help the Revolution and believes he rejoins the team a better player with a better understanding of the next level. Of course, returning to the international stage remains a huge priority.

"I learned that my game isn't fully rounded yet and I still have a lot to learn in that sense. I also learned that I played with a bunch of guys who are captains on their teams. They are leaders. I learned how to do that and what to bring back to New England. If I can step on the field and be a little bit more of a leader here I might be able to progress more—and more with the national team as well.

“A lot of people will say I've done it and made the national team. But I haven't yet. I had a chance and I thought I took it decently well. But there are always things I can do better. I set goals for myself and I reached them all except for one: making it past the group stage.

"That in itself adds fuel to the fire."

What did you think if Rowe's work with the national team? Do you expect to see him back with the squad? Share your take in the Comments section below.