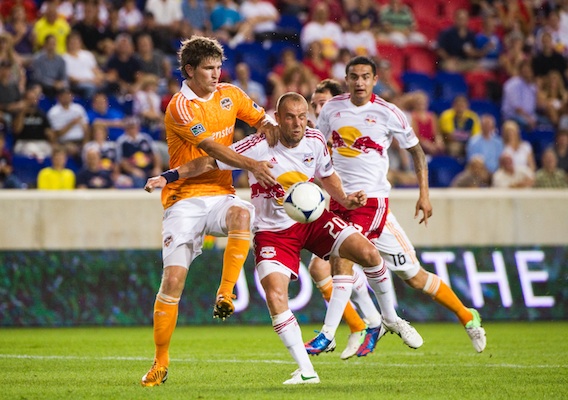 Jared DuBois Is Fond of Feilhaber, Big on Boswell

Jared DuBois is not just a co-host of The Best Soccer Show. He's also an opinionated ASN 100 Panelist. We caught up with the smartass Californian and asked him about his December rankings.
BY John Godfrey Posted
December 18, 2012
7:00 AM
1. Michael Bradley moved past Clint Dempsey for the No. 1 spot in the ASN 100—do you agree with that change at the top?
I have ranked Bradley at the top of the ASN 100 twice in the first three rankings. I think right now Bradley's club form is not that much ahead of Dempsey's. Granted, Dempsey's current form is lower than it was last year at Fulham. However, what makes the distinction so clear to me is that the U.S. team just does not function the same without Bradley. I liken it to Three's Company. Dempsey is like Chrissy Summers and Bradley is Jack Tripper. Chrissy got a lot of laughs, got all the magazine covers, and was a great part of the show, but was replaceable. Jack Tripper was the glue that kept that show churning. 2. Who is the most overrated American player in terms of their current ASN ranking? Why?
George John. I'm sorry I just don't get it. The only thing George John should rank this high on is an Adam Corolla Eyebrow Look-a-Like Contest. I had John down at #77 overall, 23 spots lower than he appears on this list. George John's ranking is like Greece's economy...over-inflated. 3. And the most underrated player? How come?
I'm the last true believer. I just can't quit you, Benny Feilhaber!! Maybe I'm just a sucker for a handsome dude and a smile. (You feel me, One Direction?) Or maybe New England just wasn't right for a skill set I still believe is somewhere under the surface. Luckily, with his move to Sporting Kansas City we won't have to wait for long to find out. 4. Which player outside the top 100 most deserves to make the list?
Now I don't know when everyone made their December rankings, but unless you did them three weeks early, I don't see how Bobby Boswell didn't make this cut. Dude was on fire like a Marlboro in the month of November. He's very close to Jermaine Taylor's equal, and Taylor will be playing quality Hex minutes for Jamaica this summer. 5. Who should be off it?
This was the one... This was the month I decided to stop believing in the Ghost of Chad Marshall Past. The guy just isn't getting it done, and he just had another surgery this offseason. I wish him the best, I really do. But there's a new generation coming up, and to make room for it, we are going to have to say goodbye to the past. What do you think of Jared's take? Go ahead, sock it to him in the Comments section—he likes the abuse. Jared DuBois is an ASN 100 Panelist and co-host of The Best Soccer Show. Follow him on Twitter.