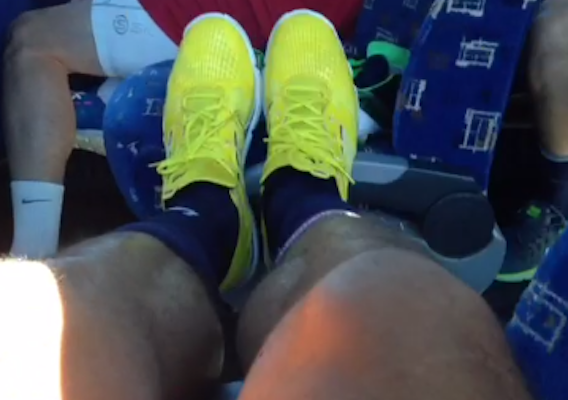 Is that Sir Terry Wogan or Mr. Omar Gonzalez?

The United States center back wears bright yellow shoes and gets his Riverdance on; Mix Diskerud drives around in the cold; Who's that homeless man in first class? It's Brek Shea.
BY Jesse Yomtov Posted
February 09, 2013
3:32 PM
10. Mix Diskerud: That’s 10.4 degrees Fahrenheit

Anybody who thinks this is funny... Well, it's not! twitter.com/MixDiskerud/st…

7. Ike Opara: Apparently Juan Agudelo is “that guy” who just needs to always be Barca…

@jagudelo11 well you should probably stop playing with the best team...just a thought

6. Chris Pontius: Seeing as Dax is now a big baller…

@daxmccarty11 when are you taking me to dinner?

“@tallyhallgk: Anybody else going to the Humble Rodeo tonight?” is that a rodeo with very modest cowboys?

3. Brek Shea: There’s nothing wrong with wearing sweats on an airplane!

Ppl look at me so funny when I fly first class. Maybe it's bc I dress like a homeless person...at least I'm comfy! #dontjudge

2. Robbie Rogers: Well, when you fail on loan in England’s third division, these things tend to happen…

Just read my "rights" were traded to Chicago... Love how the MLS works, pretty funny.#rightlessinthemls

Nothing wrong with a lil river dance before training, right? vine.co/v/b1LOBZAAIhT