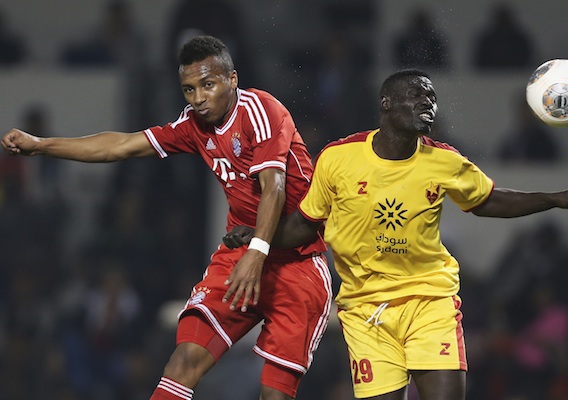 How Does Julian Green Fit Into U.S. Depth Chart?

When the 18-year-old Bayern Munich attacker pledged allegiance to the U.S., seven U.S. players likely wondered if their World Cup roster spots were in jeopardy. Here’s how we handicap the situation.
BY Liam Daniel Pierce Posted
March 25, 2014
6:53 PM
JULIAN GREEN’S RECENT commitment to the United States men’s national team hasn’t come without its fair amount of controversy. The big question on everyone’s mind is whether or not Klinsmann won Green over by promising a “golden ticket” to play this summer in Brazil. Despite Green’s insistence that “guarantees never exist,” the timing is conspicuous, and it would likely take a major blunder on Green’s behalf to lose Klinsmann’s favor. So if Green shows even a glimmer of skill in pre-World Cup friendlies and somewhat lives up to his tremendous hype, he’s likely going to make a direct impact on the national team’s depth chart, affecting many players who’ve been in the national team picture for quite some time. Here’s a look at the top candidates likely to get edged out if and when the kid stays in the picture.

Green alternates at left wing and at forward, so it’s possible that Klinsmann makes space for him in the disputed third spot in the (4-2-3-1) forward depth chart. Johnson is arguably the person holding down the squad’s No. 3 striker spot—behind Jozy Altidore and Aron Johannsson—so he has the right to feel somewhat unsettled about the young Bayern gun showing up. But Johnson has demonstrated unusual staying power with the U.S. national team. He’s proven to be extremely effective on set pieces, with his laser-sharp headers—especially straight off the bench—and he can dismantle a defense with his pace. Expect to see Johnson holding on to his No. 3 spot, taking the field in Brazil as an impact sub for Altidore.
Verdict: not bumped by Green

Bedoya is a perennially underrated, fairly selfless player with a field vision that can stitch together Bradley’s backfield and the attack. The result is somewhat bread-and-butter, but the man knows how to pull the trigger when the time comes. Plus, he was just about the only American doing something better than terrible in the Ukraine game, showing some prowess taking corner kicks, keeping possession, and creating space off his man. Despite the fact that Bedoya’s winger/attacking midfielder role is directly in conflict with Green’s specialties, Bedoya has worked too hard to be pried out of his seat on the flight to Brazil. Plus, Klinsmann tends to deploy Bedoya on the right, which makes for less of an overlap.
Verdict: likely not bumped by Green

Diskerud has proven to be something of an anomaly for the Stars and Stripes. He is a prolific playmaker when it comes to his club career, but he’s hot-and-cold for country. It has been said that America’s Mane Man might feel too comfortable with the slower Norwegian pace, and doesn’t step up when it comes to the world stage. Nevertheless, he can provide pure gold on occasion. But having a checked “unpredictable” box doesn’t bode well for a World Cup resume—especially since only three games are promised in Brazil. Not to mention the fact that Mix was recently left out of the equation against Ukraine (albeit against his will). There’s a possibility Green has a roster space to wedge into. We’d certainly miss Diskerud’s his long flowing locks if Mix were to go. Verdict: a contender for Green

Remember that other mohawk-prone prodigy, who was positioned to save the U.S. from mediocrity? After scoring in his debut at the age of 17 and then equalizing in an oft-ignored tie against Argentina, Agudelo was slated to be the next big thing back in 2010. While the hype has settled a little, Agudelo’s triumphant season with the New England Revolution earned him a recent purchase by Stoke City, and he’s making quite the case for himself as a creative playmaker. Agudelo’s European experience is likely currying some favor in Klinsmann’s eyes, but not enough to keep Green’s chances at bay. Why? Because Utrecht and Stoke aren’t Bayern Munich—even if Green has played only 10 minutes for the first-division team.
Verdict: Green has the edge

Brek Shea—the often-ridiculous winger, built like an Avatar—seems to pull something out of nothing whenever he’s subbed on. And I think that’s the largest asset the U.S. national team will lose if Shea is docked: super-sub unpredictability. His left foot is a tremendous advantage when it comes to crosses, but Zusi and Donovan already provide quality service from the sides. And like Diskerud, the inconsistency isn’t helping Shea’s case. With Green’s preferred position at left wing (Green is right-footed), Shea seems likely to get the boot. Plus, his poor form and bad form of late aren’t making him a very favorable candidate.
Verdict: Shea’s on the outs; Green on the ins.

You could argue that Agudelo, Johnson, and Wondolowski are all out of the Green equation because they’re strikers. But with Altidore, Zusi, Donovan and Dempsey likely to hold it down in front, Klinsmann could be looking for a versatile forward who can alternate into an attacking midfield role. In this capacity, Wondolowski is out of the question. Wondolowski’s brand of loose-ball goals in the Gold Cup and South Korea were scored against fragile defenses that would make Group G chortle. Simply put, Wondolowski’s pick-up-the-scraps style simply wouldn’t work in the face of a Nationalmannschaft back line.
Verdict: Green trumps him

This is a sad one, but the ambitious, humble veteran left winger for the Houston Dynamo is the obvious choice to be bumped from the U.S. roster after Green arrives. Again: Green’s preferred position is left wing, and it seems like Davis’s last chance at making a World Cup is on the fritz. Davis simply didn’t make a strong enough case for himself in the game against South Korea, which opened up the opportunity for the German 18-year-old. Davis’s story might be one of those “what-if” tales we share with no one in particular at the bar next to us in 2018.
Verdict: Green ends Davis’s hopeful run WIll Green make the team? If you had to move him ahead of one person on this list, who would it be? Tell us in the Comments below. Liam Daniel Pierce is a freelance journalist from Oakland, Calif., and a U.S. Soccer die-hard since 1998. This is his first article for American Soccer Now.