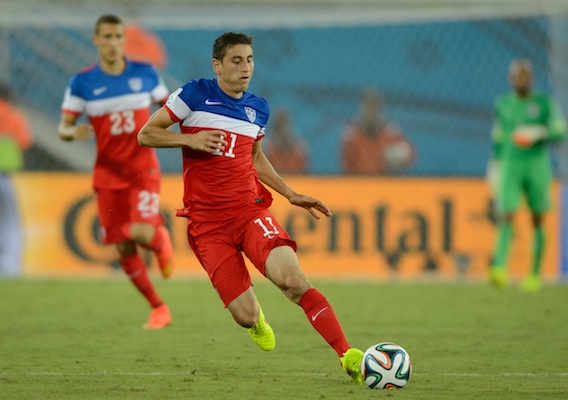 The 27-year-old New Jersey native made his World Cup debut on Monday against Ghana, and he had plenty to say about that experience, and about Sunday's showdown with Portugal and Cristiano Ronaldo.
BY Brian Sciaretta Posted
June 20, 2014
11:50 AM
AFTER A STUNNING VICTORY over Ghana, the United States national team has a golden opportunity against Portugal (Sunday at 6 p.m. ET; ESPN) to move toward its goal of advancing out of the Group of Death and returning to the World Cup knockout stages. Alejandro Bedoya, 27, made his World Cup debut against Ghana and was part of a tremendous defensive effort as the Black Stars tried to exploit multiple injuries to American players. Bedoya was substituted out of the game in the second half with cramps and a hip pointer, which he says “was bothering me a lot” but insists he “should be all right” for the Portugal game. “I use it as motivation, really,” Bedoya said of the hip pointer. “On the bench, when [Ghana] scored, the [reaction] was just a gasp of air, but to get that goal, and I was hurting a bit so I couldn’t even make it over to the corner flag to celebrate. You got to soak it all in, right?”

Though banged up a bit, Bedoya participated in training today in Sao Paolo. The team flies to Manaus later today.
“Our bodies are banged up a bit and now we put all of our focus on Portugal," he added, "and I think we will be able to do that.” The United States sits in second in Group G, trailing Germany by goal differential. Bedoya, Jurgen Klinsmann, and the rest of the U.S. national team is well aware that, despite the positive result, Ghana controlled most of the game and that must improve because Portugal will likely be more lethal with its finishing. The U.S. took on an unexpectedly defensive posture against Ghana, and with good cause: Clint Dempsey scored 29 seconds into the match; the team lost two starters early; and two more were forced to play through injuries. Against Portugal, Bedoya is looking for the team’s offense to get into better positions with more effective combination play. “I think our defensive shape looked good at times, that part was not the biggest concern,” Bedoya explained. “But obviously keeping the ball, and being a little bit more calm and confident in keeping the ball and possession, and just keep it down.” “It’s a little funny, you know, that they way you think about—like the fact that we scored so early on, it’s obviously a great way to get things started, but at the same time it kind of messes up the game plan because you kind of have a natural tendency when you’re up a goal to kind of go, ‘All right, you’re up one-nil, let’s try to protect this lead.’ And it sort of messes up how we wanted to keep the pressure up, [keep] intensity and high tempo up.” So how will the U.S. approach a Portugal team which has Cristiano Ronaldo leading the attack? While Portugal suffered a thorough 4-0 loss to a powerful German team on Monday, Bedoya knows Portugal is not out of contention and the U.S. is not safe in the standings. As a result, the team’s approach will be to play organized defense both in midfield and in the backline—while at the same time going for the win. While a draw would increase the team’s chances for advancement, a win would almost guarantee it. “Yeah, I mean, we all believe in each other,” Bedoya said. “We have size, strength, speed back there as well. Not just the defenders, but if you look on to the midfielders the way they tend to do things, we’re all the type of players that are going to do that: tracking back and help our defenders. So we have a good group, and everybody’s strong.” “Personally, for me, the win and three points was huge,” he continued. “Portugal is going to be a tough game. It’s football, anything can happen. Based on past World Cups, sometimes four points isn’t even enough so I don’t think we’ve gone that far to think that if we get a draw, we are safe in the group. I think we are trying to go out against Portugal and win that game, and then we don’t have to think about anything.” Over the past week, Bedoya has been enjoying the World Cup experience with his teammates and with his family, who also made the trip to Brazil. But he is excited to see the reaction and support the team is receiving from American fans back in the United States. He has seen the now-famous You Tube clips of bars and parks erupting with enthusiastic fans following Brooks’ goal.

After playing his entire professional career abroad and with a father and grandfather who played professionally in their native Colombia, Bedoya knows that soccer is a way of life throughout the world. The pressure all teams face at the World Cup is enormous. Unlike many teams at the World Cup, however, the United States is creating new fans and is an important part of the growth of the game in its country. The reaction over the Ghana win and the growing anticipation for Sunday’s game against Portugal is something that gives a lift to Bedoya and his teammates. “It’s just awesome,” Bedoya said. “I feed off of it, it’s awesome that were part of this movement of growing soccer in The States. So it’s really cool, and I’m sure everybody feeds off this energy and it’s really good to see.” What do you think of Bedoya's contributions to the U.S. national team? Share your thoughts in the Comments section below. Brian Sciaretta is an American Soccer Now columnist and an ASN 100 panelist. Follow him on Twitter.