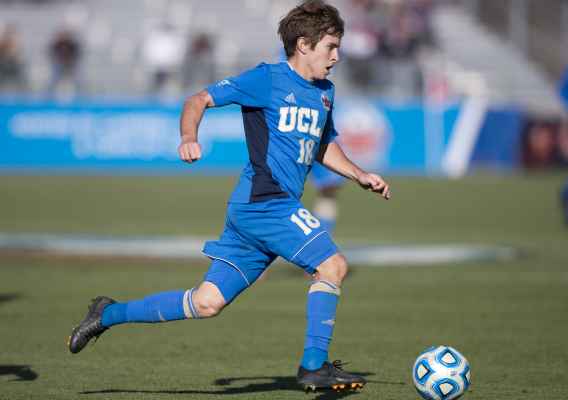 As a college player with UCLA, Iloski was talented but struggled with injuries. After a disappoiting MLS draft, his fortunes changed with a contract offer from Poland's biggest club, now the California native is determined to take advantage of the opportunity.
BY Brian Sciaretta Posted
March 09, 2018
2:00 AM
THE MLS SUPERDRAFT IS TYPICALLY a huge moment for many young American soccer players who are looking to find a team to begin their professional careers. In the end, only a small number get drafted at a high enough level to expect a contract. For the rest, their professional career is in limbo.

For Brian Iloski, 22, the 2018 SuperDraft was a major disappointment. After completing a fifth season at UCLA, which he was able to do because of injury, he had hoped to be selected with a high draft pick. In his final season for Bruins he earned an all-Pac-12 first team selection after being the team's leader in points, goals, and assists.

At the draft in Philadelphia, he fell far below expectations and was eventually selected by the Colorado Rapids in the fourth round – a level where few are awarded pro contracts..

“I was disappointed,” Iloski told ASN from Poland. “I was not expecting to drop that low, to be honest. Just as in life as in football, you can't get too high or too low. That was definitely one of my lowest moments in awhile. But I was able to bounce back and take advantage of another opportunity.”

That other opportunity turned out to be Legia Warsaw, the most successful team in Polish soccer and a frequent participant in the Champions League. Legia was in Florida in January for its winter break to participate in the Florida Cup. With the MLS Combine also taking place 30 minutes away, it sent scouts to monitor players. For Legia, Iloski stood out.

Legia invited Iloski to train with their first team for four days in Florida and the Escondido, Calif. native impressed. Legia then invited him to a second winter break camp in Spain for 10 days where he continued to perform well. Then they invited him back to Poland where the intent was to sign him.

“It definitely went into my decision with how low I was drafted,” Iloski said. “But even if I was drafted in the first two rounds I think this is an opportunity that not many people get. So I felt like I had to take it. It's a huge club and they saw a lot of promise in me. So I am happy. There was a ton going for me this past month with the combine and the draft and then this. There are definitely a lot of emotions and a lot to think about. But I am happy with how it turned out. I am looking forward to being here for who knows how long and improve and adapt to the football over here.”

Iloski believes he has fit in well so far. At just 5′ 7″, he has been able to utilize his best strength which is his versatility. Just as he did with UCLA, the left footed Iloski has played a variety of positions for Legia including left midfield, central midfield, and attacking midfield.

“I was honestly a little bit intimidated going into training with these guys but I felt after the first couple of trainings I stood my own and I saw that I could play with them,” Iloski said. “They saw situations in games and in practice that I felt like I saw in the past, but maybe other people might not have seen. I feel like here we’re all on the same page from the get-go. That gave me confidence.”

UCLA head coach Jorge Salcedo believes Iloski has the skills it takes to succeed in Europe. As an MLS veteran himself, he was disappointed but not surprised with how the situation unfolded at the draft and is confident Europe will suit him better.

“I still think that unfortunately, we place a priority on things in the game that shouldn’t be as high up the list as starting points,” Saucedo said. “I still think our soccer IQ, our technical application, our awareness of space with and without the ball – to me, those should be higher priorities than way we evaluate players. Brian has two of the most important skillsets you need to have as a professional player – his speed of thought and his technical ability to make a player. Brian has all of those attributes. He can identify his first option and his second option very quickly."

“The question will be dealing with players who are technical and tactical but who also have impressive physical abilities and are powerful,” Saucedo continued. “That’s what Brian will encounter and I hope that he can find a way to transition and adapt to it. For me, that will be the separator of whether or not he can go over there and contribute right away.”

There have been signs that Iloski was looking to move abroad to start his career. Last year he went on trial in Serbia with top flight club Vojvodina but despite interest from the club in signing him, he elected to return to California for school.

His roots in the game run through his family. His two younger brothers are both freshman on the UCLA team and his father, Mark Iloski, is a French-born immigrant with Macedonian roots who played professionally at the indoor level with the San Diego Sockers.

Now in Poland, Ilsoki has several clear goals he wants to achieve. Obviously he wants to succeed at Legia, but he also wants to enter the mix for the U.S. national team. As teenager he received a few call-ups to various youth national teams but a combination of injuries and disappointing performances saw he fade from the picture. He now believes that if he gets another shot, he will take advantage of the opportunity.

“During that time, I was still a little immature and overthought the game a bit," Iloski recalled. "I would just love another shot with the national team. That’s definitely an achievable goal. I definitely enjoyed being with the guys and playing with them but looking back on it, I think I could have done things differently and played better. I with the U-18s for four camps and with the U-20s for a camp before I started going through injuries. After that I never got the call again.”

For now, however, his entire focus is integrating and adapting to life at Legia Warsaw. Moving abroad has typically been a tough transition for many American players but Iloski is not feeling any issues such as culture shock or homesickness. Part of that, he says, is due to his older age when compared with many of the other Americans moving to Europe now.

But Iloski doesn’t believe he is starting off behind others despite starting his professional career later. He admits that college helped give him maturity and the chance to grow as a person. Injuries forced him to miss a lot of time at UCLA but Iloski took that time to study the game and return a more cerebral player.

“For me, I’ve also been through a lot and I am good at adapting to different situations and I know the game well,” Iloski said “I think the only part of the game I need to adapt to is the speed. But I kind of knew that coming in. I see that now being here but I feel like I’ve really improved in my one month of being with the team. There is still room for improvement and I think there is still time to improve. For me it is about playing with confidence and trusting in my abilities. I’ve been a late bloomer my entire life.”