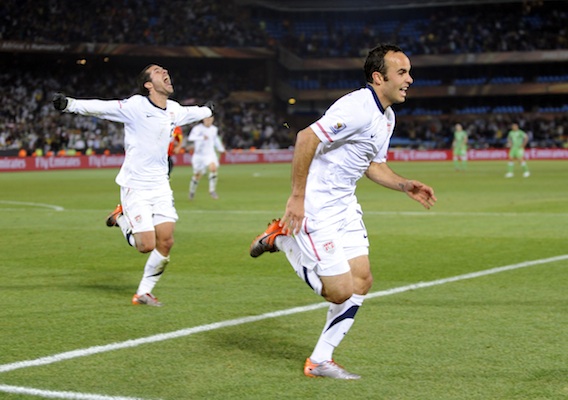 Why focus on one pundit's opinion when you can get 15 separate takes in one streamlined post? That's what we've done here, collecting the wisdom of Mark Zeigler, Phil Schoen, Noah Davis, and others.
BY various Posted
May 23, 2014
2:42 PM
Mark Zeigler, San Diego Union-Tribune
Fascinating to me, the recent events with the U.S. men’s and women’s national teams, and how different they operate. Jurgen Klinsmann is given complete license to keep or discard whoever he wants, and he does. Landon Donovan—57 goals, 156 caps—is jettisoned; Julian Green—zero goals, one cap, one promise (perhaps) of a World Cup roster spot—gets a boarding pass to Brazil. The veterans on the women’s team (yes, you, Abby Wambach and Hope Solo) feel threatened by Tom Sermanni’s experimentation with personnel and tactics, and get him fired. And get him replaced by mild-mannered, walk-all-over-me Jill Ellis. Phil Schoen, beINSPORTS.tv
Back when the absence of Eddie Johnson was making waves, I said there could be even bigger surprises in store. While everyone said it was a possibility, even Donovan himself, I do not think anyone ever really expected to see the U.S. heading to Brazil 2014 without their hero from South Africa 2010. Donovan belongs in America's pantheon of soccer heroes, some whose names are buried under decades of dust like Billy Gonsalves and Archie Stark, to other more recent stars like Tab Ramos and Eddie Pope. Klinsmann is trying to piece together his best 23 using criteria like form, chemistry, and ability. Even if Donovan is not at the peak of his skills, he is arguably the greatest player the United States has ever produced. It should not have ended like this. John Godfrey, ASN editor in chief
In the 74th minute on June 16, when Ghana is ahead of the United States 2-1 and the U.S. midfield is getting pushed around a bit and Jozy Altidore is gasping for air and the best hope for a draw is, perhaps, a swift counterattack like the one that delivered for the U.S. against Algeria in 2010, Klinsmann will realize he needs something from somebody and look over at his bench and see....what? Not Landon Donovan, that's for sure. It's bananas. But then, it's Klinsmann's team and picking the roster is a key part of the job description.

Brooke Tunstall, soccer writer
After recovering from shock I realized Landon Donovan not going to Brazil made some sense. Donovan’s form for the Galaxy has been off this year—zero goals in 7 games—and if that gets others cut, it can get Landon cut, too—especially combined with missing most of qualifying because he was looking for General Kurtz while the team was slogging through important games. This is a huge risk by Jurgen Klinsmann—perhaps one only a man with a four-year contract extension makes—he’s risking team chemistry with many untested players at the expense of the most-decorated American player ever. Laura Greene, soccer writer
It’s Thursday evening and Landon Donovan is trending on Twitter—the 32-year-old has not made Jurgen Klinsmann’s final cut for Brazil 2014. France’s Samir Nasri was not included in Didier Deschamps’ thinking, Carlos Tevez is not in Alejandro Sabella’s Argentina plans, and Donovan will not feature for the U.S. If he advances from a true group of death this summer, Klinsmann will be praised for his bold decision. Should he fail, he’ll be castigated for Donovan’s omission. As football fans, we reserve the right to be fickle. A World Cup without the nation’s all-time leading goalscorer. This will be interesting… Blake Thomsen, ASN contributing editor
Jurgen Klinsmann is taking the biggest risk of his career, and that’s saying something. Bigger than leaving out Kevin Kuranyi or benching Oliver Kahn in 2006. Back then, he was crucified for those two moves, with the German media calling for his head and questioning his credentials. He’s getting the same treatment this time around from the American media. In 2006, he thoroughly silenced the doubters with a shocking third place finish. He’ll need to at least make the quarters to silence all criticism this time around. And if the U.S. doesn’t get out of the group? Hell breaks loose. Kim Tate, soccer writer
“There are other guys ahead of him right now.” It's a line we’ve heard Jurgen Klinsmann use many times to justify his omissions. What exactly does that mean, in Landon’s case? Where is the justification in selecting a player with one international cap and zero 1st team (club) minutes over U.S Soccer’s best player in history—who has 156 caps and more World Cup goals than many of the world’s greatest? Who is “ahead of him,” and how? That’s my biggest gripe with this. The explanation as we’ve heard it does not make sense.

John D. Halloran, ASN contributor
Obviously, the big news is no Landon Donovan. While there may have been some valid arguments to exclude him, the biggest reason to include him is this: If the U.S. needs a goal late in a World Cup match, is there any other player save Clint Dempsey who is more likely to deliver? John Brooks over Clarence Goodson is a surprise as well because of Brooks' youth, inexperience, and inconsistent form over the past year. Finally, Michael Parkhurst's exclusion feels like a snub at first, but Geoff Cameron, Fabian Johnson and Timmy Chandler's versatility made Parkhurst surplus to requirements. Jon Arnold, Goal USA editor/ASN contributor
Just because we could see the signs (and you can review the ASN podcast to make sure I'm not lying), doesn't mean Donovan's omission isn't a massive shock. Klinsmann has raised my eyebrows before—and generally showed he's the far wiser of us—but this decision will echo for ages. I'm a little surprised Parkhurst and Goodson missed, but can't buy the argument that their absences will be more difficult for the U.S. to cope with. Noah Davis, ASN Deputy Editor
This is Jurgen Klinsmann's team. The exodus of Donovan, the inclusion of five German-Americans including John Brooks and Timmy Chandler, the very obviously looking at 2018—these decisions all bear the coach's fingerprints and his alone. Once we collectively get over the absence of America's all-time leading scorer, we're going to come around on this 23-man group as being a fascinating squad with lots of potential and a lot of questions to answer. The players will play the game but the responsibility for the success or failure comes down on Klinsmann, and that's exactly how the only man with the experience of winning a World Cup wants it. Jared DuBois, Best Soccer Show co-host
To quote the immortal movie Friday: "Puff, puff, give!" Certain things are meant to be passed, and legacies are one of them I guess. But it just doesn't feel time yet. There is tremendous risk here and it's risk that a guy with four years in his back pocket can take. Klinsy just put ammo in every gun pointed his way if he burns out. And that takes balls. However there is a huge part of me that wishes we could bogart the last 12 years a little bit longer. Mike McCall, freelance soccer writer
"The Exclusion" sparks an instinctively negative response, but the more you think about it—actually no, that makes it worse. We knew this was possible, but even with fears of diminished commitment or fitness, you still take him. Not even Brad Davis would have picked Brad Davis over Landon Donovan. Donovan is dangerous, his experience and poise would have been a huge asset, and it's hard to imagine Davis or Julian Green producing the kind of heroics Landon delivered in South Africa. But if there’s a plus, it’s that it happened early enough for the team to move past it. Nick Kariuki, ASN contributor
Though I think it’s more to do with Brad Davis’ better form, Klinnsman also seems to be making a firm statement that this World Cup will showcase the future by leaving out Donovan and selecting Green. I hate myself for thinking this pessimistically, but should the U.S. not advance to the knockout stages then Klinsmann will have at least given future starters like Green, Yedlin, and Diskerud big tournament experience. Elsewhere, I hope Klinsmann ends up looking shrewd banking on Brooks’ talent over Goodson’s experience, and at the same time Wondolowki’s proven international record over Boyd’s red-hot club form. Josh Deaver, ASN contributing editor
You can't blame anyone for feeling angry/confused/sentimental over Donovan's exclusion, and with good reason; he remains a cultural touchstone for soccer in the United States. Nevertheless, the Americans chances in Brazil still remain largely hinged on the performance of Jurgen Klinsmann's continually evolving backline. The selection more than underlines a degree of uncertainty, with the seemingly trusted hands of Brad Evans, Michael Parkhurst, and Clarence Goodson making way for three players in Yedlin, Brooks, and Chandler, with a combined nine senior level appearances between them. It's part frustrating, part fascinating. OK, your turn now. Keep it to 100 words or less. Go!